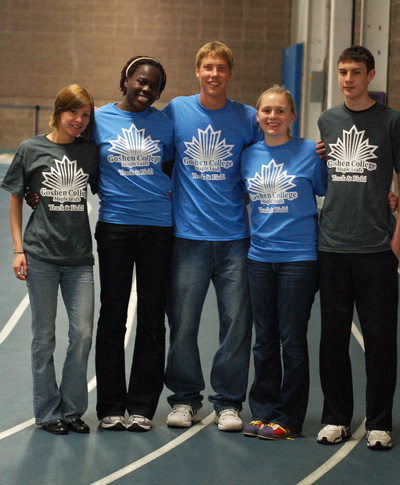 While many students on campus were finishing up assignments and attending their classes last week, a few were spending time in Johnson City, Tenn. at the NAIA Indoor National Track & Field Championships, March 4 to 6. In the event with over 100 schools from around the country making an appearance, Goshen College left its mark. Finishing 16th overall with a total of 12 points, Goshen was the highest placing team from Indiana and also had two women receive NAIA All-American Honors:  Peni Acayo and Tina Peters.

On the women’s side, Rachael Baker, Acayo and Peters all put up solid results. Acayo placed second in the triple jump with a height of 39’11 1/4”; a number better than last year’s winning height. With that, she set a new school record, beating her own previous record of 5 1/2”.

“Peni did a great job of responding to the competition with five of her six jumps better than her incoming best mark,” Clark said. “To accomplish this shows how well she prepared herself and helped top off an indoor season where she broke her school record at four consecutive meets.”

Peters placed 4th in the 3000-meter race walk, with a time of 14:44.11. The three-time defending national champion received her fourth straight All-American honor.  Though 14:44.11 was her best national appearance yet in what turned out to be a very strong field, she had to settle for 4th place.

“It is very evident,” Clark said, “that Tina’s performance over the last four years has caused others to increase their efforts in the race walk and has made it a stronger event.”

Rounding out the results for the women was Rachael Baker, placing 8th in the 1000-meter run. Though she ran a 3:06.42 in the final, her preliminary time of 3:00.58 was a new school record, replacing Petrana Petkova’s time from 2007.

The men’s side also had new record-breaking additions for Goshen College with first time competitors Jake Gunderkline and David Horst competing in the 3000-meter race walk. Gunderkline placed 8th, setting a new school record of 14:35.06. Horst finished in 10th at the competition. Clark complimented their efforts, saying “both of them competed well and gained valuable experience at their first national competition.”

On making his first national appearance, Gunderkline said “the atmosphere was kind of intimidating.”

“The venue is so big,” he said, “the track is longer than normal, and the amount of people in there was something I’d never experienced.”

But this turned out to be a positive thing, as “everyone set personal records and some new school records.”

“It was cool to see everyone step up.  The huge energy in the room helped everyone compete at a higher level.”

With an indoor season under their belts, track and field athletes are now preparing for outdoor competitions. The first outdoor meet will take place on March 20 at the Dick Small Invite in Defiance, Ohio.