Sevigny Strives for the Meaning of Beauty in “Ladies’ Bar” 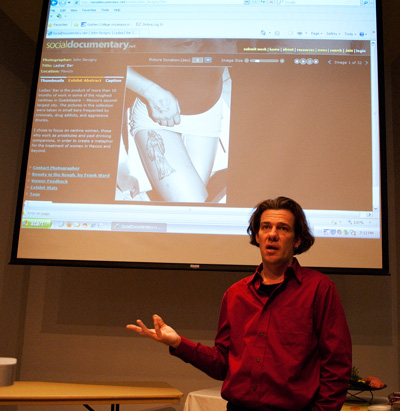 On Tuesday, John Sevigny, a photojournalist and human rights activist presented his project called “Ladies’ Bar.” In the photos, Sevigny explored the meanings of the words “woman” and “beauty.”

Sevigny spent 10 months bar-hopping in Guadalajara, Mexico. He wasn’t there for the tequila or the prostitutes. He was there to photograph the subculture of female prostitutes in Mexico as a “metaphor for women around the world.”

Many times, the women Sevigny photographed were paid more to sell their bodies than they would make at the only other option- a factory job. Most of these women had been physically and sexually abused, had numerous children, and had only completed their elementary education.

The first four months, Sevigny focused on getting to know the women as people rather than as the objects that they’re often portrayed as. He was interested in their work, their lives, what they do and more.  On occasion, Sevigny also passed out information about completing their high school education.

Sevigny strives to show the difference between media ideals and the real world. As an example he pointed out a photograph of one woman, who is striking a sexual pose while wearing a leotard labeled “Jazzercise” and sticking her tongue out.

“We have a need to look one way,” Sevigny said. “But then there’s the reality of who we really are.”

Sevigny realizes that “Ladies’ Bar” won’t bring an end to prostitution, nor will it change the way the world views women and beauty. But “by taking photographs of these women, all of the sudden they exist,” he said.

John Sevigny has lived in Mexico for 10 years and is a volunteer for Belen Posada del Migrante, a shelter for Central American immigrants crossing Mexico to get to the United States. At the shelter, he does medicinal and counseling work for immigrants. Those interested in volunteering or donating towards the cause are encouraged to contact Sevigny by e-mail at jmmsevigny@gmail.com.