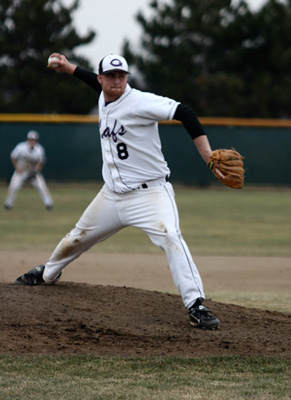 The Goshen College baseball team hosted the Indiana University-Northwest Red Hawks on Tuesday in a double header for its first home game of the season. Scoring a total of 24 runs, Goshen captured both ends of the double header with wins of 13-3 and 11-1.

The contest was scheduled because a four-game series over the weekend was canceled due to some unfavorable field conditions in Tennessee and Kentucky.

Although Goshen pulled out the victory in both contests, it was the Red Hawks who started off strong. In the first game, IU-Northwest scored first and held onto a 3-1 lead going into the bottom of the third. It was then that Goshen’s offense came alive.

First-year Corey Johnson had a leadoff single that put the Maple Leafs into high gear. In that one inning, third baseman Zach Reed, a junior, hit two doubles, getting a total of 5 RBI’s. Once the third inning ended, Goshen had a commanding 11-3 lead over the Red Hawks. After senior Caleb Kitchell’s relief pitching, the game ended in the bottom of the sixth thanks to the 10-run rule.

In similar fashion to the first game, IU-Northwest took the first lead, but was not able to stop the Maple Leaf’s offense. In the second inning, Johnson hit a three-run double. Then in the third, senior Josh Yates hit his first home run of the season, resulting in two runs. The Red Hawks were never able to get back on the scoreboard. Goshen held on for an 11-1 victory.

Maple Leaf leaders on the day were Reed and Johnson, each with 6 RBI’s. They went 5-for-7 and 4-for-6 at the bat respectively. Senior Kraig Miller started the second game and struck out four batters in his first four innings, in addition to picking up his first win of the season.

Another change to the schedule is on March 11; Goshen will be hosting Siena Heights University at 3 p.m. This game starts a stretch of five home games before the Maple Leafs head off to face Grace College on the March 25.