Religion and humor: Tartuffe comes to the Umble stage 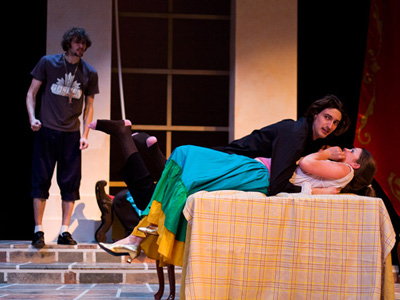 This year’s Spring mainstage Moliere’s “Tartuffe” is filled with 17th century pomp, boasting a translation from the French that keeps the original rhyme scheme, elaborate costuming design complete with wigs and all manner of frills and Baroque-style music freshly composed by Assistant Director Patrick Ressler.

As director Doug Caskey noted, however, despite having been written over 300 years ago, “Tartuffe” still retains much of its relevance today.

The classic comedy tells the story of the seemingly pious Tartuffe, played by Sophomore Aaron Kaufmann, and his deception of the gentleman Orgon and his mother, Madame Pernelle. Tension both comedic and dramatic emerges as Orgon’s clever wife Elmire, and other concerned family and friends, including the young suitor Valere, aim to counter the imposter’s tricks

According to Caskey, “Tartuffe” has historically caused controversy due to its frank portrayal of issues involving religion, leading to its censorship and harsh critiques of its playwright Molière on the basis that it undermined the Catholic Church.

Although religious issues today may have changed since then, they are far from gone, which Caskey remarked is evident in the continual and constant debate over the playing of the national anthem here at Goshen College.

Caskey also observes that the comedy excels in forming humor not only out of the tension between religion and theater but between characters and a myriad of conflicting interests and situations.

In keeping with the “Think For Yourself” season theme, Tartuffe presents many opportunities for the audience to observe and reflect on the nature of honesty, faith, and love – and, of course, to enjoy the elaborate and humorous performance.

Tartuffe opens next weekend with performances in Umble Center on March 19 and 20, and the following week on March 26 and 27, all at 8 p.m.. Sunday matinees show at 3 p.m. on March 21 and 28. Tickets cost $5 for students and seniors, $8 for general admission, and may be purchased at the Goshen College Welcome Center or by calling (574) 535-7566. The play runs just over 2 hours and is rated PG for all ages.