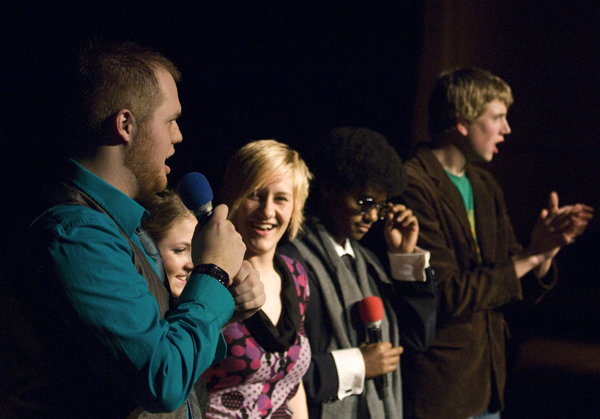 Goshen College students were surprised at Spring Kick Off last Saturday. Not only because of Goshen’s longstanding tradition of talent, but because of the new policies. No coats, no bags and don’t forget your bathroom pass!

The Campus Activities Council (CAC) enforced the policies for two reasons: to follow other standards and to prevent problems from previous years.

It is standard procedure for music performances that people hang up their coats in coat room provided.

“We were just following suit,” Tim Blaum, of CAC, said.

Goshen College has had numerous problems with spilled drinks, chewing tobacco on the floor and gum on the seats in past years. Its CAC’s responsibility to clean up and cover these damages. This in turn results in less CAC events.

Some may have noticed the bathroom passes for those needing to use the restroom during the performance. The bathroom pass was partly enforced due to restroom vandalism that happened a year ago during Kick Off.

“A group of people don’t need to go to the restroom at one time,” Blaum said.

Yet, regardless of the disappointed students who couldn’t go to the restroom with their friends, most enjoyed the variety of talent that even a small college like Goshen can offer.

Kick Off began with a group drumming for Haiti.  Kenson Theus, a 2008 Goshen graduate from Haiti gave a few words about his homeland.

Theus said that for those who haven’t experienced the destruction in Haiti, it’s sad. But to those who grew up there, it’s devastating. Theus encouraged Goshen College students to keep Haiti in their prayers, and a donation box for Haiti was placed outside of Sauder Concert Hall after the show.

The college produced a variety of talents including a ukulele band that played “I Gotta Feeling” by the Black Eyed Peas and a sign language dance routine.

Yet, in the end, the judges could chose only the best three acts.

Coming in third was the group Dynamics, who backed-up Amy Hansen singing “Mercy,” originally by Duffy. Second place was taken by “Pope and Steen’s” dance to “Too Legit to Quit.” “Elspeth and the Barefoot Babes” received first place at Kick Off, playing “Viva la Vida,” originally by Coldplay, on a host of violins.