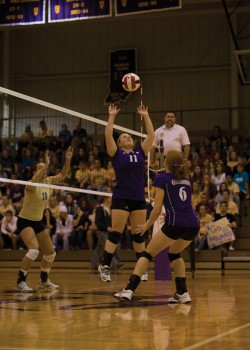 Peni Acayo beat the all time record for Kills for a GC volleyball player, but the Leafs still fell in the MCC final this weekend. Photo provided by Sports Information Department.

Following an epic five-set win over Marian University in the MCC Conference Semifinal last Thursday, the Goshen volleyball team looked to cap off their historic run to the team’s first MCC championship match appearance with an upset of NAIA #16 Taylor University.

Unfortunately, Saturday’s match at Taylor did not go well for Goshen as they fell in straight sets to the Trojans.  “We had a hard time at the net blocking their hitters.  I will also say that they were 2-5 inches taller across the front,” said head coach Jim Routhier.  “I think the team played very hard and with a lot of intensity Saturday.  We serve received pretty well and we never gave up.”

One of the highlights of the match came in the form of personal achievement.  Peni Acayo, a  junior, led the team with 17 kills, allowing her to pass alumnus Anna Herdeck’s mark of 1,431 for the Goshen College career kills record.  Acayo ended the season with 1,447 kills in her career, with her senior season still to come.  Coach Routhier had high praise for Acayo.  “Peni was voted MCC conference Volleyball Player of the Year. That tells it all.  She is the best player in our conference.  (She is) very well deserving of the record and the award.”

Given the success of the team this year, Routhier has high expectations for next season.  There is a solid group returning next year, and Routhier has been working on a solid group of prospects looking at coming to Goshen for volleyball, including a verbal agreement with Stacy Wyse, an All-State setter from Archbold, Ohio.  The team will be without Ali Hawkins, Lindsey Nofziger, Gina Richard and Ashley Janssen, who all graduate this year.  “I really am excited about next season and the great potential we have,” exclaimed Routhier.