A Portrait of Goshen’s People 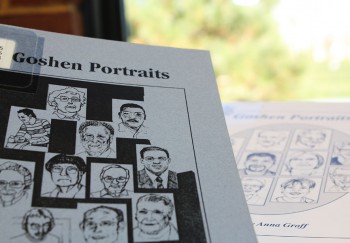 Goshen Portaits is a Pinchpenny Press book of profile essays released ever few years, featuring individuals that live and work in Goshen. Photo by Tim Blaum.

The following is an excerpt from “A Violin Professor Going on 17,” a profile of Solomia Soroka written by Alysha Landis.

Solomia Soroka, an assistant professor of music at Goshen College, knew her career path when she was only 6 years old.  Despite her childhood dream to become a biologist, her mother enrolled her in music school.  Ever since then, it has always been about music – and the violin – for Soroka.

For a child growing up in L’viv, a large city in western Ukraine, learning an instrument at age 6 was considered a late start.  Soroka studied the piano first.  When she went to take the entrance exam to get into Krushelnytska Music School, she was told that she had a good ear for pitch and should begin learning the violin right away.

Initially, Soroka’s father wasn’t fond of the idea of her becoming a musician, although he was always supportive of his daughter.  “He was an artist, so he knew the type of difficult lifestyle that I would have,” Soroka said.  “He would ask me things like ‘Why can’t you just stay at home and practice instead of going to that school?'”

Once Soroka had enrolled in music school, though, her father accepted the fact that she was going to be a violinist; he began to have ambitious hopes for her.  Although Soroka’s mother was not a musician herself, she did appreciate music and wanted her daughter to learn something that would stay with her for the rest of her life.

The school was only a short walking distance from her house, but that didn’t stop Soroka from being tardy.  “I would always sleep until the last minute,” said Soroka, “and when I’d arrive late, I would blame it on the public transportation, even though I didn’t even use it.”

Once she arrived at school, however, she was all business.  Soroka spent four to six hours every day practicing her violin.  At first, her parents forced her to practice.  Eventually, as she noticed the progress of her peers, her competitive nature drove her to practice even more.  She became particularly competitive with a close friend who was an avid player.  “He started playing violin when he was three and was considered a type of child prodigy,” she said.  “The more he succeeded, the more it made me want to practice harder and be better than he was.”

But as Soroka continued to mature as a musician, her motives stemmed from a deeper place than just competition.  When she was in fourth grade, her teacher introduced her to the Mendelssohn “Violin Concerto.”  It was one of the first pieces of music  that she felt moved by.  Recognizing this beauty marked a significant turning point in her musical maturity level.  That year, when she was only 10 years old, Soroka gave her solo debut with the L’viv Philharmonic.  She performed Mendelssohn’s concerto.

Soroka’s most memorable teacher used some unique teaching methods, Soroka remembered.  This teacher had a strong personality and put a lot of effort and soul into teaching Soroka.  “He was very strict and would often scream at me,” Soroka recalled.  “One time he threw me out of the lesson for not practicing.  Another time he threw a chair because he was so angry.”  Time has softened her view of the teacher, however. “I was really afraid of him, and maybe even hated him at times,” said Soroka.  “Now I look back and can appreciate what he did for me.  He pushed me to reach my greatest potential.”

After graduation, Soroka traveled with a private teacher to study with her in the former Belorussia for two years.  When her teacher moved to Finland, she decided to enroll in the Kiev Conservatory (also known as the Tchaikovsky National Academy of Music).  The conservatory was highly competitive.  “Entering the school was one difficulty, but there was also pressure to win competitions, and just in general to be a star was always a goal,” said Soroka.  “But I enjoyed the competition.”

Look for the rest of Saroka’s story in the upcoming book from Pinchpenny Press, “Goshen Portraits.” The book, which includes photos, features 13 pieces profiling figures who live and/or work in the Goshen community. All profiles were written by students in Duane Stoltzfus’ Writing for Media and Features Writing classes last year. “Goshen Portraits” will make it’s debut in the beginning of December. A release party will be held on Tuesday, December 1 at 7 p.m., where some of the authors and profile subjects will speak. Books will also be for sale. Further details will be available as the publication date approaches.