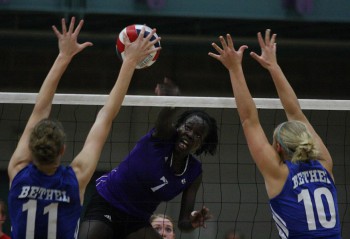 Peni Acayo, one of Goshen College's star volleyball players, jumps up for a spike in Tuesday's game against Bethel. Goshen defeated Bethel, securing the Leafs' spot in the MCC Semifinals. Photo by Martin Brubaker.

The regular season wrapped up last Wednesday evening for the Goshen Volleyball team where they were unable to pull off the upset against #16 ranked Taylor University, falling in four sets.

First-year head coach Jim Routhier thinks the team will take pleasure from some smaller victories.  The Leafs were able to win one set during the match. Taylor dropped just five sets during all of conference play this season, going undefeated. “There is a reason they are ranked No. 16 in the country,” he said. “They are very big and talented.  We played very well at times, but you have to be more consistent when you play a team as strong at Taylor.”

The Maple Leafs went 15-15 during the regular season and 4-4 during conference play, good enough to earn them the No. 3 seed in the Mid-Central Conference tournament.

The Maple Leafs beat Bethel College here at home on Tuesday evening in the MCC Quarterfinal game to earn the volleyball team’s third MCC Semifinal appearance in program history.  The victory also meant that Goshen remained a perfect 8-0 in matches played at home.

Goshen was 2-1 against the Pilots during the regular season, but the team was unable to earn a victory against Bethel College during conference play.

Goshen came into the tournament as the No. 3 seed and won the first set comfortably by a score of 25-18 before dropping the second set 22-25.  The Leafs dominated their No. 6 seed opponent once again in the third set 25-17 and took the fourth and final set 25-23 to earn a trip to Indianapolis this Thursday to face off against Marian University.  The game is scheduled to begin at 7:00 p.m.