Hour Afters, coffeehouses yet to come 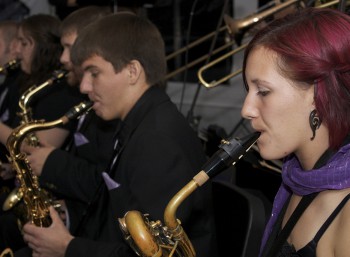 Adriel Santiago and Rachel Mast played with Lavender Jazz at Sing and Swing, which is usually considered an Hour After, though this year it was incorporated into October's First Friday events. Photo by David Zwier.

Every year the Campus Activities Council (CAC) hosts several events that highlight student talent and help students bond campus-wide, but this fall, many students have been discussing how there have been fewer of  their favorite events, Hour Afters. Some students even have concerns that with a lack of these particular campus activities, students might be more likely to participate in weekend drinking.

The funny thing is, there have been the same amount of CAC events thus far this year as there have been during the past several fall semesters: the Sing and Swing and Kick-off and an extra party after Monday Night Live.

Director of Student Activities Michele Fanfair-Steury said there hasn’t been an Hour After during September for at least the last three years, but that there are already plenty planned for the rest of the year.

Students should celebrate; many say they’ve been waiting. Several students refer to Hour Afters as fairly integral to their adjustment to the Goshen College community.

Julia Baker, a junior, said that as a first year, she never felt like she was able to spend time with juniors and seniors outside the classroom except for at Hour Afters.

“And Goshen is so talented!” she added.

“There’s just a camaraderie thing [at Hour Afters],” Leischner said, “I guess sort of like a soccer game, except that instead of yelling, people dance.”

Many first year students even come to Goshen with an idea of how fun Hour Afters can be.

Peter Garry, a junior transfer from Hesston College, said he heard about Hour Afters from a close friend, Mark Histand, and has been pretty excited about going to one.

He won’t have to wait much longer.

The CAC plans Hour Afters, which are typically two-night, two-hour-long programs showcasing a student or group of students’ talents who receive $200 in exchange. The CAC also plans coffeehouses, shows that are similar in fashion but are only one performance, paying $100 to the performers.

Both Hour Afters and coffeehouses are planned far ahead of time. Fanfair-Steury said that to have an Hour After or coffeehouse in September, the performers would need to contact her by May term the school year before.

In only a few weeks CAC will host the first coffeehouse of the year, a Poetry Slam Coffeehouse on Friday, October 30. Patrick Ressler is organizing a Pop Choir Coffeehouse for Friday, November 13. The first student-led Hour After of the year will be Friday, November 20 in the Union Gym when Alana Kanagy presents a night of theater and dance. Although it is an Hour After, that performance will only be held one night, but it will be in the Union gym and seat up to 300 people. Then Mark Hershberger and his roommates will hold another Hour After December 4 and 5.

To plan or talk about having your own coffeehouse or Hour After, e-mail Michele Fanfair-Steury at michelefs@goshen.edu.