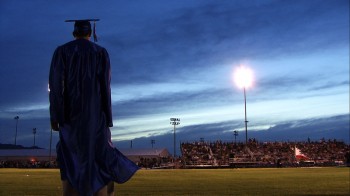 A Screenshot from Topaz Adizes' new documentary, "Americana," which follows two high school graduates through their process of deciding to enlist in the U.S. military. Photo provided by Public Relations.

For Topaz Adizes, the international filmmaker who will visit campus next Wednesday, making a documentary about the United States meant leaving North America entirely.

Adizes’ new documentary, titled “Americana,” will be screened in AD 28 at 7:30pm on Wednesday Oct. 14 and will be followed by a Q & A session with the filmmaker.

The documentary examines international perceptions of the U.S.A. while following the process of two high school graduates, Tim and Anthony, as they decide whether to enlist in the American military.  Shots of the students talking about their possible enlistment are interspersed with interviews conducted in Hiroshima, Belgrade, Vietnam, and Istanbul, including discussions of how other countries perceive American culture, especially the military.

Adizes’ visit to Goshen College has been planned on very short notice by Richard Aguirre, GC’s Director of Public Relations.  Three weeks ago, Dusty Diller, a GC alum who is now working with Adizes in New York City, emailed Aguirre to see if GC would be interested in hosting a screening of Americana.  After a flurry of emails, phone calls and meetings, the plans have been finalized.  Adizes will drive to Goshen from a screening of Americana in Indianapolis, and he will be at GC for two days, showing his film and interacting with students.

Though many may have strong opinions on the subject matter of the film, Adizes does not intend to make any argument but to inspire discussion.

“The film does not put forward one argument for or against [Tim and Anthony] joining,” said Adizes. “Rather, the film creates a conversation for that to take place, and we put it in a global context.”

In addition to the film screening and following Q & A, Adizes will be in Java Junction to talk with interested students from 4:30 to 5:30 on Wednesday, Oct. 14, and from 10:00 to 11:00 Thursday, Oct. 15.  These chances for interaction with students are something that Aguirre is quite excited about.

“This documentary appears to explore issues that are especially relevant right now,” said Aguirre, “such as service in the military, the role of the U.S. military, the role of the United States in the world, and how global citizens view the United States.  I think those are all issues that we think about and are interested in exploring at the college.  To have someone who has done a movie that explores those issues is a great opportunity for [students and faculty].”

The event will be open to the wider Goshen community as well, and teachers from Bethany schools have been asked to invite their students.