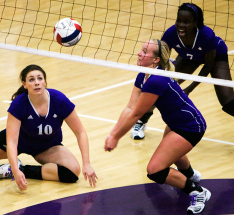 Three Goshen players dive for the ball in a match against Grace College that ended in victory for GC this past Tuesday. Photo provided by Sports Information Dept.

Entering Tuesday’s match against Grace College, the Goshen College volleyball team had been struggling to find a win.  In fact, the Maple Leafs had lost their six previous matches after losing multiple players to injuries.  However, the Maple Leafs finally got everything to click on Tuesday evening at home against the Lancers.

The Maple Leafs took 8 of 11 points after being down 16-15 to win the first set 25-21.  The Lancers never got closer than that the rest of the evening as Goshen took control and easily won the final two sets 25-20 and 25-20.  “It was a big win for us as we really needed it,” first-year head coach Jim Routhier said.  “Tonight’s match was the best team effort we have had.”

With Lindsey Nofziger and Indy Miller sidelined due to injury and illness, the Leafs looked to the bench for some much needed help.  They were not disappointed.  “One young lady, Alicia Swartzentruber, stepped in on defense and did an awesome job,” Routhier said.  “It was her first full match, and she rose to the occasion.”

Senior Alli Hawkins led the Maple Leaf offense as the only setter, and she ended with a match-high of 29 assists.  Senior Ashley Janssen and junior Peni Acayo each finished with 11 kills.

In the end, though, it was the defense that kept Goshen in control.  The backline racked up 44 digs with junior Kelsey Herschberger leading the way, registering 13 digs.  The team also had a combined 11 blocks.  “Kelsey played her best game of the year,” Routhier noted.  “Our blocking with Peni, Ashley, Brittany (Herschberger), and Cassie (Greives) really stopped their big attackers.”

The Maple Leafs are now 8-10 overall and 2-1 in the MCC.  The next play is Friday night at Davenport, and the team will host Marygrove College this Saturday morning at 10 am.