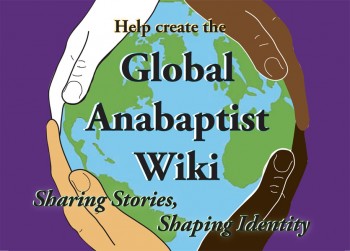 The Global Anabaptist Wiki profiles Anabaptist and Mennonite communities in 75 countries around the world. Image provided by John Roth.

This article was reported by Andrew Shenk

Goshen College’s Mennonite Historical Library has developed what it hopes will be an authoritative, expansive, and constantly evolving source for information about international Anabaptist-Mennonite groups.

The library’s “Global Anabaptist Wiki” project, which went live at anabaptistwiki.org in the spring of 2009, uses the same software and approach to editorial control as the phenomenally popular online encyclopedia “Wikipedia.” It allows users worldwide to create and edit pages about their own communities and related historical issues by adding personal stories and reflections.

The collaborative aspect also allows a more varied range of viewpoints, according to professor of history and Mennonite Historical Library director, John D. Roth. “[It’s] a window for every group to see every other group. It’s not just about telling my story.”

Last spring, when as a part of his Anabaptist/Mennonite History class students chose different international church groups to profile, research, and collect information on the stories of Anabaptist churches around the world, Roth realized that their significant historical legwork didn’t have an outlet outside of the class.

A more formal Internet resource on Anabaptist-Mennonite groups already exists in the “Global Anabaptist Mennonite Encyclopedia Online,” a project begun by the Mennonite Historical Society of Canada in 1996. However, this site serves mostly as an online home for the articles that appear in the print Mennonite Encyclopedia and other reference texts, as well as more carefully edited articles that have been added to the database over the years.

So, the Global Anabaptist Wiki was conceived as a repository for stories and detailed information about the Anabaptist-Mennonite communities that can be found in 75 different countries, as well as a “little less formal” place for churches to “tell their own stories,” Roth said.

Annali Smucker, a fourth year who participated in the research portion of the class, explained that the larger goal for the project is to “get some of the diversity of the Mennonite church accessible to anyone.” Since the church is seeing the most growth outside of the United States and Europe, she sees the Wiki as a chance to remind Mennonites of “the richness of tradition, newness, and diversity we have among our sisters and brothers around the world.”

Smucker emphasized the importance of this kind of global conversation to the church’s future: “If we want to continue as a denomination, we need to be in dialogue and learning with the areas where our denomination is growing.”

Roth and others led a workshop at the Mennonite World Conference last July in Asuncion, Paraguay to gauge the viability of and interest in such a project. “People were very enthused,” Roth said of the meeting, and since the current online framework was set up in May, 124 content pages have been created.

Many of these pages focus on nations with Anabaptist populations and the churches that have been established there. Communities like Jesus Village Church, South Korea and Phnom Penh Mennonite Church, located in the capital of Cambodia, have pages with detailed origin stories and sections for descriptions of key individuals from the churches’ histories.

Another example is a collection of “Why I Am Mennonite” essays, written by Goshen College students enrolled in April 1999, a representation of the kinds of stories and gathering of information Roth wishes to make the site a home for.

According to Roth, however, the freedom of this form of information gathering is not without its drawbacks. Before being able to rely on a consistent flow of new content, the site needs to reach a critical mass of basic articles to draw in readers and make them feel comfortable contributing.

The lack of a significant promotional budget also worries Roth, as without a global awareness campaign, a logistically complicated matter considering language and cultural barriers, the site will have a hard time reaching many of the users it will rely on for content.

Another complication comes from the project’s international and multi-language goals, as at this point even the site’s basic informational pages have not been fully translated into common languages like Spanish, German and French. The Mennonite Historical Library is focusing on having instructional pages translated for now, but it hopes to eventually implement a mechanism for contributions to be interpreted as they are submitted.

The project is an attempt by Roth to “tell the Anabaptist story differently” by keeping the global church in mind. By setting goals of worldwide collaboration and contribution instead of attempting to chronicle the church as a single body, there might be a place for an entirely new kind of story in this “Global Anabaptist Wiki.”