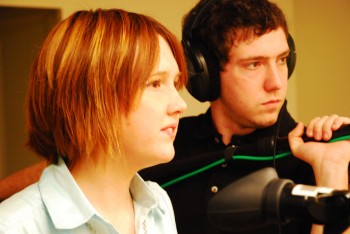 This article was reported by Katelyn Yoder.

Taylor Stansberry, a senior communication and theater double major, Doug Hallman, a senior communication major and theater double major, and Sarah Jensen and Dusty Diller, who both graduated in April, all enrolled at the Los Angeles Film Studies Center (LAFSC) last year. During the semester, they took classes and completed an internship with different companies based in Los Angeles and the surrounding areas.

While the students studied and worked in the Los Angeles area, they stayed in the famous Park LaBrea towers. The Park LaBrea apartment complex is known for parks full of green grass and palm trees complete with fountains; the space is a rarity in the metropolitan city of Los Angeles with over 3.5 million people packed into the small area of 465 square miles. Living together in apartments allowed students to form a small community in a big city. “I love film and movies, so it was heaven for me to be surrounded by other people who loved movies and films as much as I do,” Stansberry said.

“There were a lot of really strong people of faith, so that was really nice,” Stansberry said. “Surrounding yourself with people who have strong faith and passions as you, that’s what I loved about it.”

Seth Conley, an assistant professor of communication, explained the importance of faith in the program: “What we do in our business life is not disconnected with our personal life,” he said. Conley also pointed out that Los Angeles is a big city with a large variety of religions and that it is “important for the students to have a support system.”

The internships in which students are placed are nonpaying positions. Although internships on actual movie sets are not included, they provide an inside look at the entertainment industry.

Stansberry’s internship was at Filmlook, Inc., a post-production house in Burbank, Calif., a 45-minute commute. During her time there, she helped promote the company, sat in on meetings with the editors, and even walked her supervisor’s collie, Harley, a couple times. While it was a good opportunity, Stansberry came out with a different perspective on post-production than she had going into the internship. “I was interested in post-production at the time,” Stansberry said. “[I] Realized it was something that I wouldn’t enjoy in the long run.”

Though Stansberry no longer wishes to work in post-production, she did learn that she wants to produce. In her Motion Production Workshop class, Stansberry was one of the producers for her group, and she even wrote the script for their film, “The Third Wheel.”

Applications for the Los Angeles Film Studies Center are readily available online. The deadline for the upcoming spring semester is October 1st. Chanuk Algama, a junior communication major with both film studies and multimedia concentrates, has already applied and been accepted while senior Nathan Morrow and junior Haven Schrock are still in the application process. The program requires a G.P.A. of at least 2.75 as well as junior/senior status. Applying to the film school requires a $50 application fee. Reference letters from the applicants’ resident director and academic adviser are also required.

The Los Angeles Film Studies Center is a great opportunity that Goshen enables students interested in film to participate in.  “LAFSC was great,” Stansberry said. “I highly recommend it, you learn so much, you meet wonderful people, and it’s a great experience. It really helps you figure out what you want to do later on in your career.”

Though Stansberry loved the chance to “get fresh air,” she did miss one thing about Indiana.  “After two weeks of straight sunshine with 70 degree weather,” she said, “I missed the rain.”