I signed us up for basketball 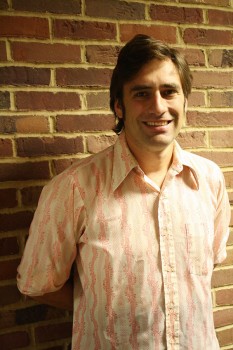 “I signed us up for intramural basketball!” exclaimed Joe. Joe McCullough was a 280-pound top-heavy Irish buddy of mine. I say top-heavy because while his legs were those of a thin 12 year old girl, you couldn’t have stuffed his torso into a 50 gallon drum. He had a huge buffalo head but arms so stick thin that they barely extended beyond his girth.

“We’re all getting fat and moody … yes even you my marathon running friend!”

It was impossible to argue with Joe. So the next night (we were too good for practice) the five of us waddled down to the gym. We were pumped. “GO WEST!” by the Pet Shop Boys was still ringing in our ears. And I must say, we looked a mite handsome in our uniforms. They didn’t match or anything flaky like that. In fact, I think that Wes (my roommate with 180+ IQ – whatever) was the only one in shorts. I wore flowered tights with parrots on them. Mike Brix (another roomy with mutton chops) sported cape and cane. Jim (roomy who suckled his thumb) brought his comfort pillow, and Joe wanted to wear a skirt so that he could have, “unrestricted leg movement.”

Not that he moved a lot during the game. Mike, Joe, and Jim had an unhealthy penchant for cigarettes and 3:00 am runs to Denny’s. So, five minutes into the first half, they picked a side of the court and sort of hung around until the action came their way. We lost the first game 70 to 5. And the sad part is that we really tried.

I think others may have seen our efforts and been inspired. The next game, a throng of cheerleaders showed up. Yes, cheerleaders (with skirts, pom-poms, and cheers). We really didn’t know the girls all that well, but they really cheered when we scored a whopping 8 points.

Our third and final game was the best yet. We had made some stupid bold predictions that this would be the game in which we would score into the double digits. Double digits! I actually went to bed the night before dreaming of the numbers 10, 11, and 12.

The other team was determined to keep us under 10 points. But they failed. With less than two minutes to go we had 8 points. Joe was just sort of hanging out near the 3 point line all alone. And then, by some miracle, we actually passed Joe the ball, and he caught it! Looking like a cross between a T-REX and a leaping Scotsman, Joe shot-putted the ball to the hoop.  There was no arch or grace.  But it went in!

I guess what this story says is that if you feel that you don’t fit in…well you probably don’t. But don’t sweat it.  Just try. Try to have fun with it, and don’t forget yourself.