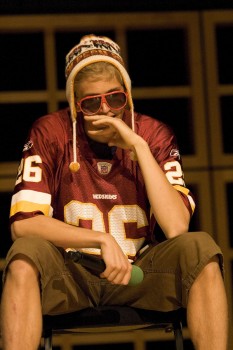 Monday Night Live is a way for student-run programs on campus to make themselves known. Student senate started things off with a cooking and cleaning video in the new AVI Fresh facilities. Latino Student Union, the Black Student Union, Eco-pax, and the International Student Club all used the opportunity to talk about their programs while entertaining the crowd with jokes, videos, and skits.

CAC members introduced themselves by showing video footage related to their rap addictions. Even Goshen College President Jim Brenneman joined in the videotaping fun with his own personal confession as a hopeless rap addict.

Throughout the night, the music group Alumuno performed between acts and CAC videos. Alumuno, whose name is a combination of “alumn,” for alumni of Goshen college, and “uno,” for the extra members in it who are not alumni, played a variety of styles that symbolized much of the diversity represented by the evening’s presentations by various clubs and unions.

“As a band, playing together is really a joy because we have such varied musical influences, tastes, and tendencies,” said band-member Kaleem Kheshgi, recent GC graduate. “With so much variety we just keep surprising one another, it’s great.”

The night concluded at Newcomer Center where CAC provided “after-party” snacks for the crowd and Alumuno provided dance beats.