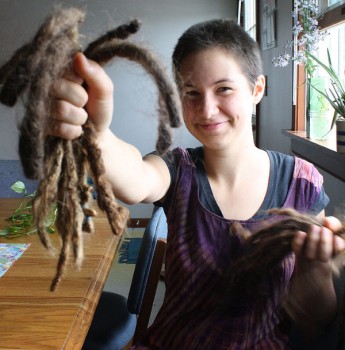 Smucker had over 40 dreadlocks which she cut off shortly before this school year. Photo by Molly Kraybill

It’s that strange stuff that grows out of your head that most people take for granted and a lot of people spend a lot of time thinking about. If you knew me before this year, or were so lucky as to receive a special package in campus mail, you know that I used to have dreadlocks. I got them right before college as a mostly spontaneous decision without any profound reasons other than I wanted a change in my life and I felt a bit rebellious towards Lancaster Country, not fully realizing what this change in my appearance would do to others and to my own view of myself. Dreads are so many things to so many people. For some they are a religious symbol, an act of solidarity, a fashion statement, or simply letting hair do what it does naturally for many people. For me, they became parts of all of these reasons, and after three years I can honestly say that having dreadlocks has shaped the way I think. I came to college with a rat’s nest and had my eyes opened and reopened.

I can’t begin to share the stories residing in my hair. I’ve met countless people stopping me on the street who have shared about when they had dreads, their brother who has them, or how hair has affected their life. I met someone from Tennessee whose dreads had molded to her head. My dreads saved me from being mugged in Tanzania (crazy story) and were mistaken for a tarantula by a sleeping friend in the middle of the night on a camping trip. Sand from trips to the dunes trips during May term of my freshman year is buried deep inside some of the back ones, now sitting on my shelf. Dreads are communal. They have to be. I always needed help working on them and these hours of working always led to great conversation.

Dreads have also taught me something about the way people judge on first appearance. Police have driven slower upon seeing me, and a man once started yelling at me in a grocery store. People make assumptions because of the way another person looks. It opened my eyes a bit to a reality that many people face every day. My aunt just told me that having a relative with dreads has changed the ways she looks at other people with dreads. Dreads have gotten me into certain communities and out of others. If anything else, they sure are a great conversation starter. “Soooo you ‘re a Mennonite…but you have dreadlocks?” “Yup” I responded to my boss at a fish fry market in Lancaster County, PA. Dreads come in handy when you are trying to whip people in the face when dancing, fancy a pillow in the library or need to be Medusa for a night.

Yet, I cut them. Why? Frankly, my scalp needed a break, I was getting headaches, I wanted to take swimming this semester and I’m ready for a change. Dreads have been a part of my identity and the way I view the world for the last 3 years. I don’t give that up lightly. But in the end, it is just hair and I don’t want to be defined by something so fleeting. I want to be here at Goshen for a time without dreadlocks. And yes, buzzing your head also gives you great stories. (Public restroom washing my hands, a woman walks in, stares, turns to go look back at the sign on the door). “Wait, are you…? Is this…uhh… is this the women’s restroom?” ☺

This perspective is by Annali Smucker, a senior Art and Psychology major