New Food in a New Rott 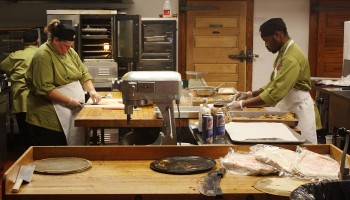 For the first week of classes, students’ mealtime discussions often centered on opinions about the new food service, AVI Fresh, and all the changes it brought. While many students like the new changes, some do not.  There are a variety of reasons for each opinion.

Many students feel that, yes, the quality and variety of food have improved, including sophomore Daniel Gingerich.

“Overall,” Daniel said, “I have been favorably impressed with the quality of food in general, certainly in comparison with last year.”

“I like being able to count on something that’s interesting at the fusion station, but reliably having good pizza to fall back on if nothing else is really doing it for me that day.”

“I think it’s better,” he said, “but there’s not as much room for creativity.”

Last year, he explained, if you didn’t really like the flavor of something, you could combine it with other items from around the Rott. For example, if you didn’t like the scrambled eggs, you could add a mountain of salad bar toppings, then microwave them together to soften the vegetables. Mast particularly enjoyed adding toppings, like rice crispies, to his ice cream.

Many people are content with the variety of the offered food, though, without creating their own food combinations. There are now more entré options, with the added deli bar, pizza bar, and fusion station, which offers tastes from around the world. The fusion station has been a big hit with many students. Several students also commented that they appreciate how AVI Fresh brings out a food’s flavor with select spices and not just oil, as they thought Sodexo did.

Many students also commented that the quality of service increased.

Along with all the changes students appreciate, however, there are some that are less loved.

Many of the complaints about the new service have to do with space.

Gingerich noted “the slight traffic flow problem around the end of the fusion station where there are maybe 3 feet to walk through from one half of the cafeteria to the other” as a problem.

Senior Joe Friesen also mentioned this problem, noting that because most of the drinks are on the North end of the building, bottlenecking traffic is inevitable.

Sophomore Stephanie Hollenberg and senior Charity Grimm said that their major complaint with AVI Fresh is their lack of labeling.

“I am allergic to wheat, dairy, eggs, and cane sugar,” Hollenberg said, “and so it’s been a bit frustrating eating at the Rott since they don’t list the ingredients like Sodexo did last year, especially since wheat and cane sugar are very common additives in today’s diet. For example, I have no idea what’s in their veggie burger.”

Overall, students seem to believe that AVI Fresh is an improvement over Sodexo, but that some adjustments need to be made.