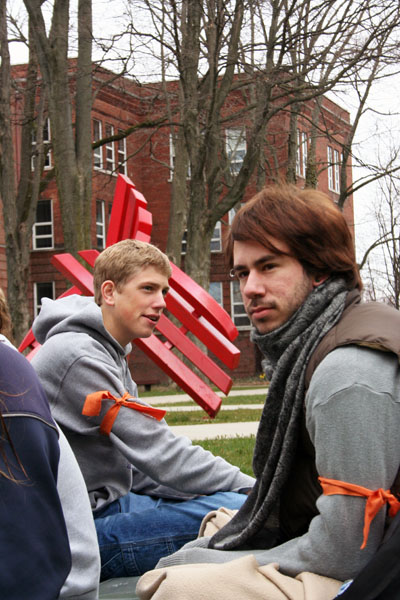 A crowd of nearly 100 people gathered next to the broken shield in front of the Administration building on Wednesday to join in silent objection to Goshen College’s policy against employing openly L.G.B.T.Q. faculty and staff.

A card table was set up next to the sidewalk, and fliers on the table informed passersby why this large clump of people had crouched on plastic grocery bags on the wet grass, orange strips of cloth tied around their arms, for 50 minutes of complete silence on a Wednesday morning. “We’re here,” the flier said, “to show that we as a student body (and others) are opposed to this unfair policy, and to be a starting point for later discussion surrounding this topic.”

The silent vigil was meant to raise awareness of the lesbian, gay, bisexual, transgender and queer community. The event was an informal student initiative, unaffiliated with any campus clubs. Joanna Landis, Chet Franklin, Piper Voge and Jessica Bubp, all seniors, organized the vigil, with help from several other students.

“We recognize that the college administration’s hands are somewhat tied on the issue due to links to the Mennonite Church and accreditation through the church,” Landis said. “So instead of sticking it to the man, we just want to voice our belief as students that it is discrimination to refuse to hire openly L.G.B.T.Q. persons and that we can’t support that practice.”

People attending the vigil picked up orange strips of cloth from the card table and tied them around their arms. Orange, the color on the gay pride flag that often represents healing, was deemed a particularly appropriate color for this vigil. As the informational flier explained, “We hope this vigil can be one step toward healing of unfair practices through dialogue and education.”

“It was interesting to see faculty and administrators walking by,” said Charlotte Barnett, a sophomore. Some of them, she realized, would support the college’s current policy and would object to hiring L.G.B.T.Q. faculty and staff.

But wherever faculty and administrators stand on the issue, Barnett and other students only hope that they will be open to discussing the matter, and will realize, as Voge said, “that this is an issue that students care about.”