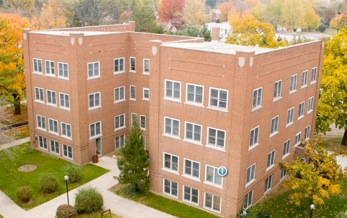 Coffman Hall is one of the residence areas being considered for homeless families.

Situated in the heart of Elkhart County, Goshen College is considering opening up the campus to homeless families short-term.

In February, Elkhart County’s jobless rate soared above 18 percent, the highest in the country, as unemployment rates rose in all metropolitan areas across the country for the second straight month.

The college’s space planning committee, which is headed by Jim Histand, vice president of finance, earlier this year began considering using campus housing to support “those impacted by our current economic reality.”

This space would include off-campus housing as well as extra residence halls. The question is whether Goshen College has the ability to effectively house families. “Those who do need housing currently also need personal support services as part of their housing,” said Bill Born, vice president of Student Life. “This reality requires some special service programs and support mechanisms we just don’t have in place as an educational institution.”

The number of homeless families seems to fluctuate. Born said the committee noted that the “short-term need is not nearly as drastic as was the case in November and December 2008.” This is due to the tax reimbursements now available to those who are unemployed.

According to Histand, it was clear “that the perspective from local community organizations already directly involved with homeless and expertise in homelessness would be critical in helping us understand what would be involved and whether there was a good match of local community need with our existing resources, or not.”

In order to gain that perspective Born said, “We have decided to meet with local leaders who work with families in need to ask them to help us assess the need and realistic possibilities related to the proposal.”

So far the committee discussed the proposal with Tim Thorne, director of Interfaith Hospitality Network, a homeless agency that coordinates overnight stays at churches; and Becky Gascho, vice president of operations at LaCasa, which provides housing and other services to the poor. Goshen College officials may also met with the Salvation Army.

Due to the complexity of the situation, there is a call for more conversations “before being able to determine if this idea is an appropriate action for the college to get involved with or not,” Histand said. This project is still in the conversation stage in which the committee members are exploring if this is even a feasible idea.

As a member of the committee, Rocio Diaz, a junior, finds the proposal a good effort in reaching out the community but is aware of safety issues. “We would not know the entire details and background on some of the people being housed, which could in fact lead to issues with concerned parents,” she said.

“[Everyone] involved in this process recognize we are an educational residential college,” Born said. “We want to make sure our students remain our first and foremost priority.”