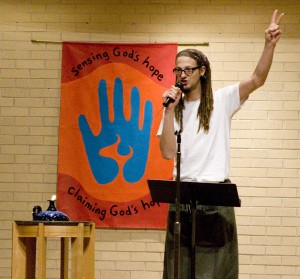 Shane Claiborne kicked off a string of appearances on GC campus with an extended chapel Wednesday. Photo by Chase Snyder.

Shane Claiborne invited Goshen College to “love God, love people and follow Jesus” in a special chapel on Wednesday. Claiborne is one of the founding members of The Simple Way, an intentional faith community in Philadelphia.

Through his message “The Scandal of Grace,” Claiborne stressed that people should not only believe in Jesus, but follow Jesus in their lives. As Claiborne reminded his audience, Jesus had an awesome imagination and did cool things like pulling coins out of fish mouths – and that’s something worth following.

Claiborne shared his personal story in following Jesus. He decided that Mother Teresa was an excellent example of a follower who knew how to sacrifice her life. After several phone calls to India, Claiborne found himself on his way to Calcutta, India to learn from her first-hand.

Once in India, Claiborne noticed Mother Teresa’s feet, which were deformed. He learned that Mother Teresa always chose the worst pair of shoes from the pile of donated shoes so others wouldn’t have to suffer. Over the years, her feet became deformed from poorly fitting shoes.

According to Claiborne, people are infatuated with ourselves. “The best thing to do is to give things away,” Claiborne said, in reference to a story about a little boy who shared his prized ice cream cone with all of his friends. “If you want to find your life, you got to give it away.”

Sometimes we forget this, but according to Claiborne, it is not too late to start a life of following Jesus. “We are a people of radical hospitality and grace,” Claiborne said.

Claiborne will again at Goshen College during chapel on Friday at 10 a.m. in the Church-Chapel. Claiborne will also speak on Thursday at the Goshen Theater downtown.