The fury of nature unleashed 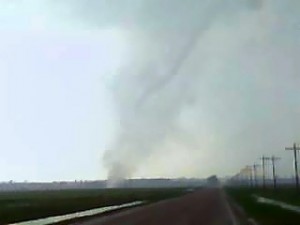 A cell phone picture of a tornado from one of Josh Hofer's many tornado chasing adventures. Photo Contributed.

For many of us the idea of a tornado sends chills down our spines. For Josh Hofer, a sophomore, tornadoes bring different emotions. Hofer does not fear tornadoes. He chases them.

Hofer has been chasing tornadoes with his father, Todd, since his elementary school days.

“It was an inherited interest and originated as a kind of father-to-son bonding experience,” Hofer said.

His interest began at age eight when his father and uncle took a young Hofer to see the movie Twister.

“From then on, the vortex has called to me–even in my dreams,” Hofer said with a far-off gaze.

Tornado chasing is a dangerous hobby and requires many precautions.

A good knowledge of the roads and landmarks is essential for any chase. “You have to know how to get around, or you could get sucked up by the fury of the storm,” Hofer said with a chuckle.

One should never chase in the dark or alone. A cell phone is also crucial. Although Hofer claimed the reason to have a cell phone was “so you can call your buddies when you see a tornado, or, you can warn them when their house is about to get blown to oblivion,” the more practical reason is so the chaser can call someone should he or she get into a tight spot.

Once precautions have been attended to, the chase is on.

Hofer and his father drove from South Dakota to Nebraska for the chase. “We were in position to watch a funnel cloud form into a full-fledged tornado less than a quarter mile away,” Hofer said. “It was pretty epic.”

Hofer and his dad attempted to get into position for a second sighting, but they were thwarted by golf ball size hail. Searching for shelter, they parked under the awning of a nearby church and waited for the hail to cease.

Once the hail abated, they left the church and proceeded over a hill a few miles away.

According to Hofer, all of a sudden, a larger and “even more legendary” twister crossed in front of them, less than 100 yards away. “I won’t lie, this one was a little scarier, but once our hearts stopped racing we got out of the car to watch it in its full majesty,” Hofer said. “We were pretty excited.”

Hofer’s second most memorable chase hit a little closer to home, about two hours west of Goshen. “I followed the storm system that eventually spawned the F3 level tornado that ripped through Nappanee in October of 2007,” Hofer said. “I was on County Road 9, which was a heavily damaged area in the path of the tornado, less than 45 minutes before it happened.”

According to the Fujita scale, an F3 tornado has sustained winds of over 158 mph.

Hofer had been chasing alone that day, and due to visibility concerns of the dwindling daylight, he abandoned the pursuit of the storm before it hit. According to Hofer, his mother was “quite pleased” with the decision.

Tornado chasing is not for everyone. For Hofer, it grows out of his love for storms.

“The power of the storm is the main attraction for me, but the adrenaline rush helps too,” Hofer said. “The rush of a super-cell charged thunder storm bearing down on you at 65 miles an hour is well worth any small dangers that might arise in the process.”

i am not a funny person, and i don't know why i was asked to be a funnies editor. all of my articles are based on 100% truth, and should be taken in all seriousness.