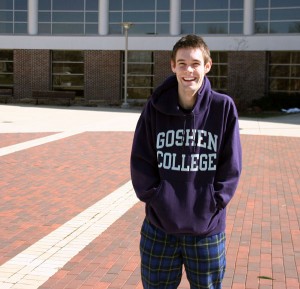 This isn’t necessarily a bad thing. Amplifiers and speakers have made music and public events audible and accessible for far greater numbers of people than was possible one hundred years ago. Some events are inconceivable without the aid of amplification.

Consider President Obama’s inauguration a couple months back, attended in person by 1.8 million people. It would have been an entirely different experience if only the 100 people closest to him could hear his address. Or consider attending a rock concert where the band played without amps. In this author’s opinion, even Radiohead, without amplification, wouldn’t be that sweet live.

Some music, however, is unique because it isn’t amplified. Such music loses an essential part of itself when it’s run through speakers. This was the case at Eileen Ivers’ Performing Arts Series concert a couple weeks ago.

Don’t get me wrong – that woman can absolutely wail on the electric violin. But when I think of Irish folk music, I picture it in a dimly lit pub, played on acoustic instruments and maybe even a bit out of tune. Eileen’s rendition was too polished, too perfect, too loud.

My continuing love affair with classical music is partly explained by these acoustical musings. Given a world-class symphony orchestra, the sound you hear is the sound its members are producing. No more, no less. Each musician contributes his or her own part, which, when combined with those of fellow musicians, creates a musical whole greater than its constituent parts.

Music such as this is greatest when experienced live. Each tone, articulation and phrase exists only as it is realized in the moment, only as the result of an unmediated, unamplified, collaborative acoustical phenomenon.

If you can, get tickets to see the Estonian National Symphony Orchestra when they perform in Sauder Concert Hall on Mar. 18. This 100-piece orchestra will showcase the brilliant acoustics of the hall in ways that amplified music simply cannot. Without speakers, without amps, this music allows a fidelity to acoustics and tone that creates a truly singular musical world.

Peter Miller is a senior English and music double major from Evanston, Ill.