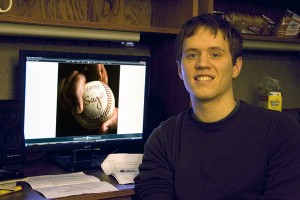 Isaac Smith is featured in the film "Sugar." Catch him in the trailer at 1:31! Photo by Chase Snyder.

Goshen College students may recognize a face on the silver screen this spring.

Isaac Smith, a senior, has a small role in “Sugar,” a movie about a man from the Dominican Republic who comes to the United States to play baseball. Smith plays Clubby, a clubhouse manager for the main character’s team.

Before “Sugar,” Smith hadn’t acted much. In high school, he was part of some productions in small roles.

“I was only listed as the cast, never as a major character,” Smith said. “I guess it didn’t matter.”

He landed a spot in the credits of a Sony Pictures film. It started with a phone call.

Smith’s high school English teacher called him during the summer of 2007. She told him a friend of hers was a casting director who was looking for a 17-22 year-old male with red hair. Smith fit the description and decided to give it a shot.

He auditioned that August and had to read one line in a variety of ways, including grouchily and excitedly. A few days later, he had the part.

Smith filmed his two scenes in September 2007. He was nervous, but only at first and was surprised by how many people were on set at once. He estimated about 40-50 people were there while his scenes were filmed.

In one scene, the film’s protagonist smashes a water cooler with a baseball bat. The script told Smith to stare, “disapproving.”

Smith has one line in the movie. He tells players that he can get tickets to their games for family and friends. He delivers it in his other scene.

The filming took place in two baseball stadiums in Iowa. For most of the time, he sat waiting for his scene. He got paid around $2,000 for his work.

“I got paid for doing that for a day,” Smith said. “It’s like, what?” He’s glad for the pay, though. He had been volunteering that summer, so the extra cash didn’t hurt.

“That really helped to shore up my finances,” he said. “My parents were happy about that.”

Since that time, “Sugar” did well at Sundance Festival and Sony Pictures Classics bought the picture. It will be released on April 3.

Most people are surprised to hear Smith was in a movie. “When [I] tell people, they don’t believe it at all,” Smith said.

He can prove it, though. He now has a page on the Internet Movie Database and is visible near the end of the film’s trailer.

This will probably be the only entry on Smith’s IMDB page. He’s glad he did it, but he doesn’t plan to look for more parts. “It was a lot of fun,” Smith said. “I learned a lot.”

He doubts that there is much demand for 17-22 year-old men with red hair. Then again, he said, “If the opportunity presents itself …”