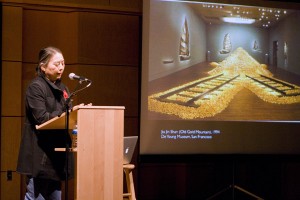 Hung Liu shows a slide of her piece "Old Gold Mountain," which used over 200,000 fortune cookies. Photo by Chase Snyder.

A crowd of students, faculty and community members gathered in Rieth Recital Hall on Sunday to listen to Hung Liu lecture about topics and issues in art.

Liu is known for her paintings drawn from Chinese historical photography. She focuses on what she calls “mythic poses” of photographs, including the human activities of “laboring, eating, journeying, leaping, fighting, dreaming and carrying one’s burden.”

Liu grew up in Communist-controlled China, which didn’t allow women to attend universities.

“We once truly believed in Communism, in a socialist Utopian dream and in heroism,” said Liu. “I have since replaced those beliefs with a kind of modern humanism, but some fundamental values and ideology from my 36 years in China stay with me.”

Liu explained how the changes in her art corresponded to changes in her life. She bases many of her paintings off of historical photographs of China.

Her most current works are based off of the 1949 propaganda film “Daughters of China.” The film is about the struggles of eight female soldiers who sacrificed their lives to save the Chinese army.

Seeing the film as a child shaped her view of women as protagonists. “History is not a static image or a frozen story,” Liu said. “It is not a noun. It is always flowing forward.”

Liu said her newer paintings allow her to paint back “memories of a propaganda film that, over time, have become a document of the revolutionary sincerity that permeated my childhood.”

Ingrid Derstine, a sophomore, found the lecture intriguing. “Although her English wasn’t perfect, she was very good at getting her point across in an effective way,” Derstine said. “She definitely has a sense of humor.”

Liu’s philosophy about art resonated with Derstine as well. “She said something along the lines of, ‘Art is about living people, and it fills the gap between time and space and personal experiences.’ I was really able to relate to that.”

Liu’s exibit will remain in the Hershberger Art Gallery until March 3.