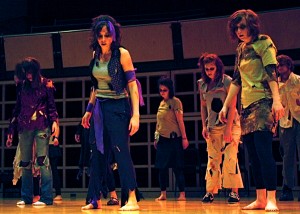 Students glided into the music building in glamorous attire for the Spring 2009 Kick-Off on Saturday evening. Acts included original songs, singing duets, several bands – including a band of singing and instrument playing robots – and hip-hop dances.

The winning act of the evening was a group of student zombies who crawled on stage to perform “Thriller” by Michael Jackson. “I learned the dance off of YouTube videos,” said Beth Glick, a junior. “A lot of us were at different places in learning the dance, and on top of that, we are busy college students.”

Second place was an original song by Greg Yoder, a senior, and David Kempf, a senior, called “Ping-pong.” With images and lyrics, they lamented the loss of their graduated friend, Jesse Landis-Eigsti. The third place act went to Adriel Santiago and Lauren Eash who performed a hip-hop dance.

Adam Roth, a fund gift officer at Goshen College and 2005 graduate, helped judge Kick-Off. Roth was impressed by the amount of talent throughout the show. “When I was [at Goshen College], there were only a few stand-out acts, whereas now every act is a stand-out act. It was amazing!”

When asked how the judges decided on the winners, Roth said, “How do you decide? The talent is phenomenal.”

Interspersed between acts, C.A.C. presented awards (maple syrup in maple leaf containers) to the winners of categories such as best room design and most unique job. These students were nominated at a previous C.A.C. event.

Free T-shirts, packaged waffles and french toast sticks were handed out to students at the conclusion of the evening.

Watch video of the winning “Thriller” dance below: