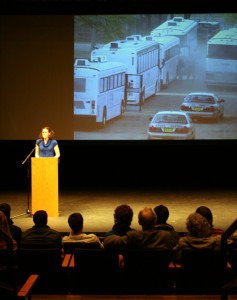 Analisa Gerig-Sickles, a senior elementary education major, won first place with her speech “No Mas Redadas/No More Raids.” By winning the contest, she received $150 and the opportunity to compete at the U.S./Canada C. Henry Smith Peace Oratorical Contest, which is sponsored by Mennonite Central Committee.

The runner-up was Isaac Yoder-Schrock, a first-year physics major, who earned $100 with his speech “National Healthcare, Caring for Others.”

In her speech, Gerig-Sickles communicated the impact of work raids on illegal immigrants. She used stories from her experience last summer with a church in Postville, Iowa, where one of the largest worker raids in United States history took place at Agriprocessors meat-packing plant.

“During the raid, many people were maltreated,” said Gerig-Sickles. “One woman who was hiding under a pile of boxes was yanked out and slapped across the face. Hundreds of workers suspected to be illegal immigrants … were loaded in vans and taken to the National Cattle Congress facility, a place normally used to exhibit cows.”

Gerig-Sickles hoped people would feel compassion for the immigrants and speak out against raids. “No matter how you feel about immigration and how our country deals with it politically or socially, I hope that you can feel compassion for the people and families affected by this raid,” Gerig-Sickles said. “I encourage you to contact your senators and representatives and to spread the word that you do not support raids.”

Frank Johnson, the special assistant to the President and one of the three judges, said they chose Gerig-Sickles’ speech because of her “ability to combine personal passion with a relevant issue in a way that compelled me to consider my role in the immigration issue.”

Yoder-Schrock spoke about the necessity of universal health care in the United States. “The U.S. currently spends almost $7,000 per person per year on health care,” he said. “We spend more than every other country in the world, and yet we are the only industrialized nation in the world that does not insure all of its citizens.”

“We need to internalize and then act upon the ideals of national health care, Mennonite and Christian beliefs alike. This means taking care of each other,” he said.

“My colleagues in the Communication Department and I feel that the caliber of the student speakers and their presentations were exceptional in this year’s contest,” said Rachel Lapp, assistant professor of communication. “It was a close contest, ultimately, to determine the winners because there were truly strong components of each of the speeches delivered.”