Maple Leafs to open season in a major league way 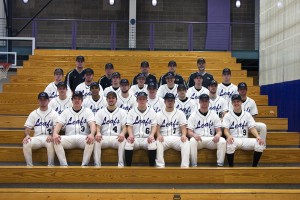 The Goshen College baseball team is revving up for their impending game at the Metrodome in Minneapolis. Photo contributed by Public Relations.

Though the bases remain frozen to the Goshen College baseball diamond, weather will not be an issue for the Maple Leafs as they open their season indoors at the Minneapolis Metrodome. This Sunday night, Goshen will go head-to-head in a four game series against Robert Morris College for their stylish season opener.

According to Maple Leafs Coach Josh Keister, the opportunity to play in the home stadium of Major League Baseball’s Minnesota Twins arose when he was contacted by Robert Morris College’s new head coach.

“[The Robert Morris] coach had been to the Metrodome during a previous job,” Keister said. “He was wanting to organize a game there this year, and we happened to be talking about the scheduling for 2009. He told me about the opportunity, and I jumped on it.”

“It is going to be very exciting to play in a major league stadium,” Keister said. “It will also be nice to know we won’t get rained out!”

Goshen College ended last season with two games against Indiana Wesleyan University and a final record of 13-40. Though the Leafs have lost last year’s top performer, Ian Swartz, to graduation, the Leafs are looking at a strong lineup of returning talent as well as new additions to the team.

Due to a difficult Mid-Central College Conference lineup for the season, Keister holds high expectations for consistent improvement.

“We need to keep improving throughout the season, and be playing our best baseball come conference tournament time,” Keister said. “We have a lot of potential, but we need to be able to transfer the potential to game situations all year long.”