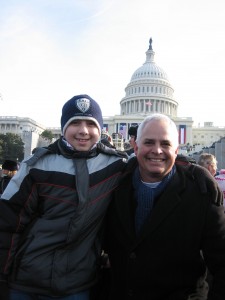 Several Goshen students attended the inauguration, but Jim and Quinn Brenneman had the privilege of entering the ticketed area, much closer to President Obama. Photo submitted by Jim Brenneman

As we drove toward Washington, D.C. for the inauguration of President Barack Obama, my family and I soon got caught up in the euphoria of what clearly was a pilgrimage for the hundreds of people we met along the way. At every stop, we met fellow travelers from all over, donned in Obama scarves, buttons, hats, caps and jackets.

The thrill was heightened early on as Quinn and I jammed into the D.C. Metro alongside thousands of others and made our way to the Capitol.

To underscore the sense of a dream coming to pass, one African-American woman held up a beautifully crafted afghan emblazoned with Barack Obama’s likeness and the words,  “From Slavery to President, January 20, 2009” scrolled across the top. Shouts of joy, amens and hallelujahs erupted, certainly something one doesn’t hear everyday on a Metro ride, I’m sure.

The day was cold but absolutely beautiful. We had near perfect seats – front and center, about half a football field below the dais where our new President took the oath of office and gave his inaugural speech. Behind us we could see an ocean of flag-waving people, which stretched back to the Washington Monument and as far as the eye could see. We could hear time and again a low rumble, which built to a tsunami of sound that rushed toward us: “O-ba-ma! O-ba-ma! O-ba-ma!”

The inauguration bore testimony to one of the great miracles of our nation: the regular and peaceful relinquishment of power, often between political adversaries. No matter who any one of us voted for, the ritual of an inauguration invokes this miracle and did so again as President Bush became Citizen Bush and Senator Obama became our 44th President.

I wanted so much for Quinn to experience this day with me. By the time I was his age (12), I had experienced much of my childhood living in the deeply segregated South, where our theaters, restaurants, beaches and drinking fountains were blatantly divided between “whites” and “coloreds.”

So to be standing in the midst of such a throng from every race, culture and creed, together bearing witness to the inauguration of President Obama, sent shivers up my spine (and not just because it was below freezing). To hear Quinn say over and over, “This is amazing!” and to hear him express his wonder at being a part of history meant as much to me as anything else I heard on our pilgrimage.

Indeed, together we experienced with millions of fellow Americans renewed hope in our pledge to be “one nation, under God, indivisible!”