Three convos for a King 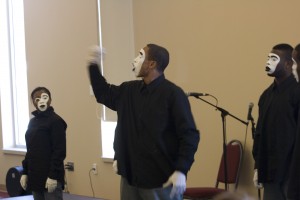 A group of hip-hop mimes performed a Barack Obama themed dance routine with a musical track containing clips from Obama's speeches for a convo Monday. Photo by Chase Snyder

The day before Barack Obama’s inauguration, programs at Goshen College celebrated the impact of Martin Luther King Jr. and the continuation of his work on the national and local level. This year’s activities emphasized the history and contemporary issues of civil rights and racism in Elkhart County.

Adam Williams grew up in Alabama but “never experienced outrageous racism,” until he moved to Elkhart around 1993. In May 2008, Williams and his family woke around 2:30 a.m. to find a cross burning 10 feet from their front door.

“The cross burning was the head of two years of racism,” Williams said.

A few days before, Williams’ daughter, Gabriela, stepped off the school bus outside her home, while a neighbor commanded her pit-bull to sic the young girl. The dog chased Gabriela all the way from the bus to her house as the neighbor yelled death threats.

Because of their experiences, the Williams’ are some of many area citizens calling for hate crime legislation in Indiana.

Stacie Meyers-Ray also shared her story of racism during the extended, hour-long convocation.

Meyers-Ray lived near the headquarters of the Church of National Knights of the Ku Klux Klan in Osceola. Meyers-Ray and her children would hear gunshots regularly and witnessed large rallies of the members in their “hoods and robes,” while some in the neighborhood did receive personal threats.

Meyers-Ray said in an interview the same day that, despite what people might think, “this sort of activity hasn’t gone away.”

In response to an audience question about why someone would oppose hate crime legislation, Meyers-Ray responded that the phrasing of the currently proposed piece of legislation – Senate Bill 0091 – includes the protection of individuals, no matter their sexual orientation. Including this has deterred many people, she said.

“‘The world in which we live is geographically one; the challenge that we face today is to make it one in terms of brotherhood,'” Dr. Tetzlaff said, to quote Dr. King. “And I think [MLK] would have added ‘sisterhood.’”

King’s sermon also urged people “to eradicate the last vestiges of racial injustice from our nation” and “find an alternative to war and bloodshed.”

Students and faculty continually reminded the audience that though the day was one of celebration and Barack Obama’s inauguration was soon, there is much work to yet be done.

“He isn’t the culmination, just one step,” said Alana Kenagy, a sophomore, in reference to Obama’s election.

The day also included a performance by Triple G Mimes to speeches of King’s interspersed with music and speeches from Obama.

The morning began with a poetry-reading, as well as the announcement of the Broadside Poetry winners, who wrote reflections on the theme of “The Dream.”

Julie Bruneau, who organized the poetry coffeehouse, also invited the audience to sing a round of “Happy Birthday” in what would have been Dr. King’s 80th birthday on Jan. 15.