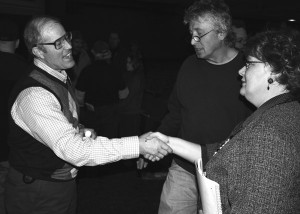 Fortunately for the crowd gathered downtown on Tuesday night at The Old Goshen Theater, the event was legal.

A lecture by Joel Salatin, owner of Polyface Farm in Swoope, Va. and author of “Everything I Want To Do Is Illegal,” promoted his sustainable farm and encouraged the Goshen community to know where their food comes from by eating locally.

For example, the cows on his farm eat from a “salad bar” of grasses in a pasture. When they are moved to a different location, chickens are put in a specific area to get nutrients from the dung of the cattle. Then the chickens lay eggs in mobile chicken coops.

By doing this, various animals use the same land for different purposes. The only energy used is from mobile electric fences or the sun.

Unlike most industrial farms, the unique methods used at Polyface are open to the public. People are encouraged to visit the farm to see how it runs and ask questions.

“In industrial farming, great care is taken to eliminate relationships,” Salatin said. “What we’re doing is bringing back community. We want people to come get in touch with their food supply.”

This current era of people who don’t where their food, water and other materials come from “is a blip in human history,” said Salatin. “I want to go out in the streets and yell, ‘Folks, it ain’t normal!'”

Salatin might not be yelling in the street, but he is getting his message out across the country. Along with being featured in Michal Pollan’s book “The Omnivore’s Dilemma,” Salatin will speak and teach classes in 17 different states during this break time in the farming season.

Salatin will also promote his latest book, which tells stories about how the USDA and other federal inspectors are trying to shut down his farm.

While the government wants to shut down alternative farms like Polyface, Salatin believes his farming techniques are the only sustainable methods. Along with the food they sell to restaurants and other business, Salatin’s farm additionally feeds about 2,500 families. He believes his way of farming has the ability to prosper.

“Can we feed the world with this way of farming? The answer is a resounding, ‘Yes,'” Salatin said. “As you build in this diversified synergy, you get more production per acre than you can get in any monoculture. Our system is the only food system that can feed the world long term.”

Salatin doesn’t think his method would hurt the economy. “We have this notion in our culture that says in order to be environmentally sound we have to give up our economy. I say we can have them both. This isn’t a little backyard operation. This is serious.”

If you want to learn about food, sustainability and the environment, the Goshen Theater shows documentaries on the second Friday of each month.