Victory over Huntington in a struggling season 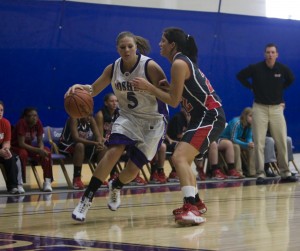 Goshen garnered a clutch win in the last minutes of the game vs. Huntington on Saturday.

This season for the Lady Leaf’s has been anything but easy. Several injuries have kept them from a full roster and they continued to struggle over winter break with the brief absence of head coach Steve Wiktorowski.

“It was tough,” said Wiktorowski, “because my father died during break, and I had to miss some games on the road. I think this put some pressure on the girls because they were trying to win for me but they were kind of out of their routine.”

Over break, the Leaf’s accumulated two wins and five losses including a hard defeat by Indiana University South Bend.

“Indiana University South Bend was a tough loss because they are rivals,” said Wiktorowski, “and we didn’t play at all up to our expectations. I had only returned to the team the day before, and I didn’t have them prepared as well as I would have liked.”

Despite some of the season’s challenges, the Leafs seemed to have rejuvenated determination during Saturday’s nail-biting 45-42 victory over Huntington University, the eighth ranked team in the Mid-Central College Conference, leaving them with a record of 6-13(1-4).

“Our game against Huntington was close all the way through,” said Wiktorowski. “They took a five point lead early in the first half, but it was tied at halftime.  Neither team could take a commanding lead the second half, and it was never completely sealed until the final horn.”

Helping the Leafs lock in the win against Huntington was junior Heather Hahn with a three-pointer, which made for a tie score late in the game.

“I know I hadn’t hit any of my prior attempts,” said Hahn, “but came off a great screen from Cassie and didn’t even think about it but just went up with my shot. I knew the score was close but had no idea that that shot would tie up the game with only a minute left.”

The Maple Leafs will try to keep the fresh momentum going as they hit the road on Saturday, Jan. 17 in hopes of bringing home a victory over Marian College.