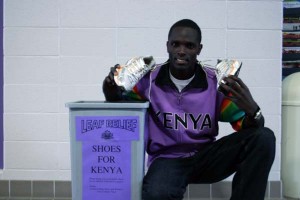 Sam Chege, a senior, shows off his shoes next to the collection bin located in the lobby of the Recreation-Fitness Center. Photo by Brandon Long

As part of the Leaf Relief program sponsored by the Goshen College athletic department, the men’s and women’s cross country teams are collecting shoes to send overseas. All donations will go to children and young adults in Kenya who are in need of shoes.

Doug Yoder, head coach of both cross country teams, thought of the idea.

“I went with a friend to Huntsville, Alabama to run the Rocket City Marathon in December,” Yoder said. “[My friend] took some old pairs of shoes with him because he said they usually collect them to send overseas. They didn’t collect them this year, so I decided we could start a program like this at Goshen College.”

According to Yoder, the decision to send the donated shoes to Kenya was inspired by cross country runners Sam Chege and Ramadhan Onyango who are Kenyan natives.

“In conversations with [Chege and Onyango] throughout the time I have known them,” Yoder said, “it is apparent that there [are] many needs in Kenya as well as the rest of the world. We are very fortunate to have an abundance of things that we really don’t think about it. Sending our used athletic shoes is a very small way of helping others in the world.”

Sam Chege, a senior, expressed the difference this program could make to those in his country who cannot afford athletic shoes.

“Nobody is going to run hungry and buy shoes,” Chege said, “so people, especially athletes, run barefoot. [Donated shoes] will be of great help because it they will increase performances while minimizing injuries.”

Shoe donations will continue to be accepted until the end of May, after which the continuation of the program will be determined based on the quantity of shoes donated.

“I would encourage everyone,” Yoder said, “to look in their closets, under their beds or wherever and donate those athletic shoes you will no longer be using.”

A shoe collection bin is located in the lobby of the Roman Gingerich Recreation-Fitness Center.