Gouin nurtures theatrical side of Goshen 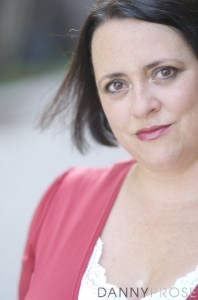 Laura Gouin has acted in a movie with Mel Gibson and is one of very few Goshen residents to be listed on the Internet Movie Database, but before she ever walked on a stage, she was tripping over everything.

“The only reason actually I’m in theater is because I’m clumsy,” Gouin said. “I mean, that’s really the reason. I used to trip on threads of the carpet, fall up stairs, run into walls. My mother finally made me take dance lessons because she was like, ‘This child is going to kill herself!’”

“I just had no concept of my body in space,” Gouin explained. “I just went forward into space and hoped that whatever was around me wouldn’t harm me.”

After enrolling in dance school and studying tap, jazz and some ballet, Gouin realized in middle school that she was so busy with dance rehearsals she had a limited social life. Gouin decided to join a school group to make some friends.

After not making the cheerleading squad or the basketball, tennis and golf teams, Gouin “auditioned for the play and got the lead.”

From that point, Gouin was in love with theater, acting throughout high school and college and then earning her master’s degree in theater. She is currently using her skills as the artistic director at New World Arts in downtown Goshen.

According to its Web site, New World Arts is a small community theater that “seeks to expand our human experience through live theater and creative media” in a small stage surrounded by only 80 seats, where you’ll see shows “you won’t see elsewhere in the Michiana region.”

While most known for their theater, musical performances alternate with plays at New World Arts. In the foyer of the theater, visitors can view artwork from local artists. Since 2005, New World has organized a short filmfest as well, which incorporates a cross-section of the arts in Goshen.

As well as being the artistic director who oversees the entire establishment, Gouin has directed several plays, including Aristophane’s “Lysistrata,” Jeremy Menekseoglu’s “Antigone” and Mark Hollman and Greg Kotis’s “Urinetown: the Musical.”

Gouin attributes a part of her directing skill to her childhood interest in encouraging — and sometimes bossing around — other people.

“I would do things like read Pippi Longstocking and think that my trees are magical,” said Gouin. “And so, I’d go and put Doritos on them and then call the neighborhood children over and say, ‘Look, our trees are magical! They’re growing Hershey’s Kisses and Doritos! Isn’t it great?’”

Gouin has since asked those neighbors if they actually believed her. One of them replied, “No, but we liked the free Doritos!”

Gouin’s creativity and direction extended to more dangerous experiments, such as when she urged a young friend – “a runt of the pack” – to try to fly. After jumping in place didn’t work, Gouin encouraged him to believe stronger, then added a cape to his outfit, followed by a suggestion to move to a barn loft.

When Gouin’s mother looked out from a house window, she realized what the kids were doing and yelled sternly to her daughter to find some other game to play.

“I’d read a book about kids who had an underground hideout and decide we were going to dig it,” Gouin said. “I wouldn’t dig it, but I would make them. So, maybe I was always meant to direct.”

After college and graduate school, Gouin moved to Chicago where she got involved with several different theaters. In 2003, she moved back to Goshen to save money. She first worked at the Blue Gate Restaurant and Theater in Shipshewana for a year, then became involved with New World Arts.

After seeing the show “The Carthiginians” on the New World stage, Gouin thought to herself, “Oh my gosh. This is like Chicago-style theater, in my hometown. Who knew there was art of this caliber in my hometown! Wow!”

After mentioning that she’d like to get involved, the New World directors put her in the executive director position. This position has since been reformed into Gouin’s current position of artistic director.

“I sort of view the artistic director’s position as similar to a [general] director in that you bring all the people together – people who have experience in these many areas, many times more so than you,” Gouin explained. “And you facilitate their art happening, while at the same time following through with the common vision.”

With such an experimental and creative theater in Goshen, Gouin thought it only appropriate to begin a professional-quality theater school, Center Stage Academy.

“I remembered that back when I was a student here, there was nothing, there was no training,” Gouin said. “You could go and get training in dance, singing or in pottery, but no one could teach you how to act. I think we do ourselves a disjustice in this country. We don’t have a national theater. Most countries do.”

“Hearing all these students expressing an interest in drama made me decide ‘OK, well, there’s a need for this,’ and, so, why not start a school just like someone would with dance and make it about professional training,” Gouin said.

“Not just, ‘oh I have a theater and we’re going to teach kids so I can get their money and parents — guess what! — you’re going to pay a lot of money, and your kids are going to have two lines for three seconds and be a tree … ’ That’s theft.”

With that thought – and growing interest from young actors around her – Gouin created Center Stage Academy in 2005, in the yoga studio on the top floor of The Famous in downtown Goshen.

“We teach movement,” Gouin said. “We teach Anne Bogart. We teach theater of the oppressed by Augusto Boal. We teach vocal techniques. We teach projection. We teach character analysis.”

Adding to the elegance of the class, Gouin teaches this all in a preserved Victorian-style building in a room with polished hardwood floor, a Venetian plaster ceiling, hanging ballroom lights and nearly wall-length windows overlooking Main St.

At the academy, students – like 7-year-old Aniya Hartzler – who are still learning to read, can identify downstage right from upstage left and are familiar with the terms “off-book” and “blocking.”

“My favorite thing to do here? Act!” Hartzler said, unsure what else she could possibly do in an acting class.

While Gouin does miss the big city, she has decided to stay in Goshen, at least for the time being. “I also feel like I’m building something that’s going to live on after me,” Gouin said.

New World Arts is beginning its tenth season. For a schedule and more information, visit newworldarts.org.