With their own eyes: GC students travel to Washington 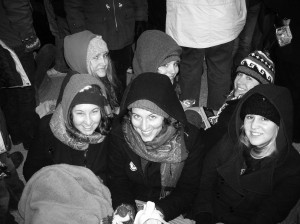 Melody Musser with fellow WCSC interns at Barack Obama's Inauguration. Melody was one of several Goshen Students who attended the event. Photo submitted by Melody Musser.

They traveled hundreds of miles to stand for hours in cold temperatures in a crowd of over one million people. But for the handful of Goshen College students who saw Barack Obama’s inauguration firsthand, it was worth it.

Some traveled to Washington by car, others by plane. One was already in the city.

Melody Musser, a junior, has been in D.C. this semester as an intern at the Washington Community Scholars Center. She noticed the city change as Inauguration Day approached.

“There has been a lot of excitement among pretty much everyone that I have encountered in the weeks approaching the inauguration,” she said. “It was interesting to see the massive numbers of porta-potties being set up lining the mall. All of the stands and vendors traded in their usual D.C. tourist souvenirs for Barack Obama souvenirs.”

Musser said she was “overjoyed and overwhelmed with excitement” when Obama was inaugurated. She said the most exciting part of the ceremony was the crowd that gathered in D.C. on Tuesday.

“People are so hopeful and supportive. Random cheers would break out of ‘O-BA-MA!’” she said.

Junior Maria Byler also emphasized the mood of excitement in the city.

“It’s such a celebration,” she said. “Everyone is just giddy.”

Byler drove to D.C. with her aunt. For Byler, Obama’s historic election is a beginning, not an end.

“I know there is still so much work to be done on race relations and racism, and the fact that Obama is elected could very easily distract people from that work,” Byler said. “But the organizing and momentum that I’m seeing both in Goshen and [in D.C.] are really invigorating.”

The diversity of people she saw also gave her hope.

“I got to sit on top of some port-a-johns and watch this unbelievable crowd of different ages, races, socioeconomic statuses, all dancing and singing and it made everything that this Obama guy keeps talking about actually seem possible,” she said.