The last issue of the semester marks the second-ever Record sports awards. The nominees were voted on by this semester's editorial staff.

Team of the Year

The women finished the indoor season by breaking five school records at the National Association of Intercollegiate Athletics (NAIA) indoor national championships in early March. In addition, four athletes were named All-American. With the outdoor season underway, three athletes have already qualified for the NAIA outdoor championships in May.

Athlete of the Year

In Dec. 2021, Stoner-Eby broke a 25-year-old record in the 400 meter run with a time of 49.94 seconds. Throughout the indoor season, Stoner-Eby went on to break two more school records and was named All-Crossroads League leading up to the NAIA indoor championships.

Coach of the Year

Nyce led nine athletes to the NAIA indoor national championships in March, and throughout the event, five school records were broken. With two meets left to go, Nyce has already led three students to qualify for the NAIA outdoor championships, which will take place in May.

Game of the Year

On the Feb. 19 senior day game, the women’s basketball team defeated Bethel University with a score of 108-98. This is the first time the team has scored over 100 points against a conference opponent.

“What a pleasure to watch Aleks and even more to coach him.  He has forced everyone around him to be better, even the opposing team.  He made me a better coach.  Aleks will go down in the books as one of the best players in the WHAC and the NAIA.” — Lauren Ford, head coach

“Epilepsy has also shown me what patience is and how important it is to not take advantage of the chances we are given. Some days, I’m frustrated with having epilepsy, but it really has formed who I am.” — Teresa Ross Richer, NAIA marathon qualifier

“As our resident statistician, I convert performances into numbers. On the field, softball catcher Ri Koteles has been our most consistent athlete of the past several seasons at doing the same — she holds the GC career records for hits, doubles, triples, home runs, and walks, and is second in both runs scored and runs batted in. (Ironically, many of the reasons she’ll be remembered well as a Maple Leaf are things that are hard to quantify — perseverance, consistency and encouragement.)” — Tony Miller 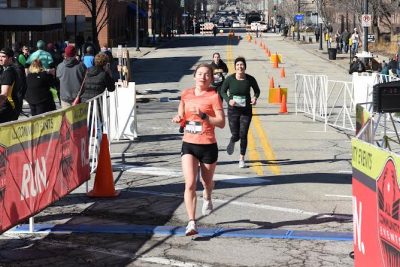