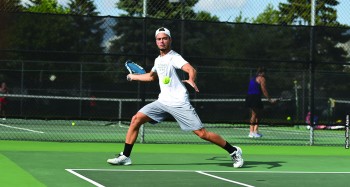 A premature run for a perfect season in the Crossroads League (CL) ended abruptly for the Goshen College Men’s Tennis Team Tuesday evening at the Goshen College Tennis Complex. A Juan Miguel Ciudad, sophomore, victory at no. 2 singles was the lone GC bright spot amidst an 8-1 defeat to now CL co-leaders, Indiana Wesleyan University.

With the loss, the Maple Leafs (2-1, 2-1 CL) have relinquished their four-way tie atop the CL and bumped to second place in the early season standings. The win for IWU (3-0, 3-0 CL) clinched the Wildcats a two-way tie with Spring Arbor University for first place in the conference.

First-year Lukas Kanther jumped out to an early 6-2 lead after the first set but lost the second 2-6 to make things interesting. He then dropped the third and final tiebreaker set 10-6 to lose a heartbreaker at no. 5 singles.

The loss snapped Kanther’s unblemished freshman campaign and pushed him to 3-1 at the no. 5 singles slot. Senior Aritha Weerasinghe was the next closest victor for the GC men with a 6-4, 6-4 loss at no. 4 singles. Weerasinghe’s loss was also his first of the young season.

“We put forth a good effort but did not execute the shots we are used to making.” Atkinson said. “[We are] proud of how our guys battled for each point but disappointed because I don’t think we displayed our full skill.”

For the women, the IWU women’s tennis team continued its Crossroads League dominance by way of a 9-0 victory over Goshen. The Wildcats (3-0, 3-0 CL) are no stranger to success in the CL, as they currently lay claim to the top spot in the conference and have won or shared the past 24 of 25 conference championships. The loss sends the Goshen women to 0-3, 0-3 CL on the season.

“Our girls showed great effort and I was really pleased with our doubles play. We held our own and played with confidence,” said Atkinson. “It will take us some time to feel more confident in our singles play but we learn from each match.”

The Goshen women will travel with the GC men Thursday to Ann Arbor, Michigan to take on Concordia University. The non-conference matchup is slated to begin at 12 p.m.