“A Justice That Heals” fills Umble 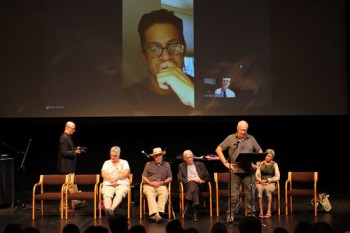 “A Justice That Heals” follows an unlikely story of reconciliation. Photo by Chelsea Risser.

Over 400 students, faculty and staff and community members filled Umble Center on Tuesday night to witness an incredible story.

The evening began with the opening question, “What’s the right thing to do when one man kills another?” A documentary exploring that question followed.

In June of 1996, the day after he graduated from high school in Chicago, 18-year-old Mario Ramos pulled a trigger and ended the life of 19-year-old Andrew Young. Amidst the 90 homicides in Chicago that month, it seemed to be nothing more than a number lost in the statistics. But the aftermath of this tragedy is anything but.

Produced by Jay Shefsky, who works at WTTW, the PBS affiliate in Chicago, “A Justice That Heals” follows the unlikely course that this story took.

Ramos was a parishioner of St. Nicholas’s Catholic Church, and his church community stood behind him while he was in prison. They didn’t support what he had done, but they supported him as a person.

Father Robert Oldershaw, the priest of St. Nicholas Parish, was supporting Ramos’s parents, but he also wanted to reach out to Young’s parents, Steve and Maurine Young.

He said, “Our faith asks more, asks that we believe there is a justice that heals.”

Initially, the Youngs met Oldershaw with skepticism, but with time, they eventually grew to trust him, and even began to attend St. Nicholas Parish.

Mrs. Young eventually got to a point where she chose to forgive Ramos, who was sentenced to 40 years in prison. Her reasoning to forgive was because “if God can forgive, why can’t [she]?” Ramos was repentant for what he’d done and accepted when Mrs. Young said that Ramos was now a part of the Young family.

During the time that Ramos was in prison, people from his church community kept reaching out to him through letters. Many of the people didn’t even know Ramos personally, just his story.

“Who am I to receive love and attention from strangers?” he asked.

Ramos may have not understood all of the support he received while in prison, but Father Oldershaw did. He explained the support as a way to bring “someone back to a fuller humanity.”

While the documentary was made 16 years ago, the emotions were just as raw on Tuesday night as the parents of Young, Jim and Janalee Croegaert, parishioners at St. Nicholas, Father Oldershaw and Ramos (via video chat) took the stage in Umble.

Mr. Young shared a homily that he had written earlier this year and shared with the St. Nicholas Parish a week after Easter. Twenty years after Andrew’s death, he expressed how hard it was for him to write this.

“It beat the living hell out of me to write this,” he said. “But once I spoke [at the St. Nicholas Parish], I felt extremely liberated.”

Ramos was recently released from prison and is unable to have contact with the Youngs, but that hasn’t stopped the Youngs from praying for him. An audience member asked Mrs. Young if she was sad to not be able to see Ramos.

Her response was simple.

Ramos realizes that he’s been given a second chance, and he continues to lean on his faith and the people around him as he strives to be better.

“This family and community have the biggest hearts I’ve ever seen,” Ramos said.

The night concluded with special music from Jim and Janalee Croegaert. While Mr. Croegaert sang and played the piano, Mrs. Croegaert was joined around the microphone by the rest of the panel. The crowd was invited to join the chorus, singing a prayer, “we watch, we wait, we cry, we long for you.”