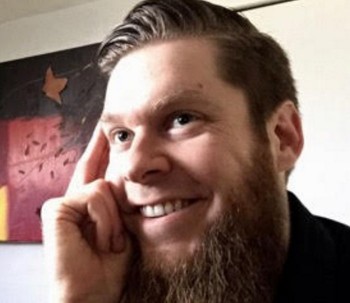 After inviting three candidates to campus for interviews, a six-person search committee chose and hired a new United States History professor. Philipp Gollner, a PhD candidate at the University of Notre Dame, specializes in race, ethnicity, immigration and religion. Born in Austria, educated in Germany, and a recent immigrant to the US, Gollner brings a global lens to the study of US history.

According to Regina Shands Stoltzfus, PJCS professor and member of the search committee, the decision was a tough one. “We were pleased to have invited three very strong candidates to campus,” she said. In the end, Stoltzfus said that the committee chose Gollner because he “met our requirements in every aspect of the job description.”

Zehr said, “Philipp was the search committee’s unanimous top choice for the new U.S. History professor, and we’re all quite excited about what he brings to Goshen.”

When asked to describe what he will contribute to the GC history department, Gollner named his own “perspective from the fringes on what it means to live in America and in a context that is shaped by the Mennonite tradition.” Gollner did not grow up Mennonite or American, but is now “happily engaging” both cultures.

Gollner first encountered Mennonites at an African-American Mennonite church in Illinois while he was a Masters student at the University
of Chicago.

Gollner described himself as sarcastic, notes “some literacy in true football—or soccer, as you call it,” loves singing, enjoys living in the Midwest heartland and has a self-proclaimed “drive to search for the true, the good, the beautiful and the ugly across disciplines.”

Describing his philosophy of teaching, Gollner said, “For good or for bad, history pushes us to see the most fascinating and the most repulsing ways in which humans have made sense of themselves and each other.”

He added, “Without working together to create a space big enough for questions and open enough for engaging stories, we’ll never get to know our own particularities and those of others, and we’ll leave without ever stretching our empathy and curiosity. What a waste of four years of life and tuition. I work hard to teach in a way so that doesn’t happen.”

Steve Nolt, the departing U.S. history professor whose job Gollner will take on, affirms the search committee’s hire. Nolt said that Gollner’s experiences of immigration and his new familiarity with the Mennonite tradition gives Gollner unique sensitivities as a scholar. According to Nolt, “Philipp brings a fresh perspective in U.S. history.”

Shands Stoltzfus said that she looks forward to “the possibility of Philipp’s work helping advance the work our campus is already doing around Mennonites and race.”

John Roth said that Gollner “has thought carefully about questions of race, immigration, and ethnicity, he is a gifted teacher and he has a deep commitment to Goshen’s Core Values.”

Roth noted that Gollner “has lived in cross-cultural settings his entire life.” In addition, “he’s serious-minded, but has a great sense of humor.”

Speaking of humor, Roth and Zehr both commented on the Amish-style beard that Gollner wears. Roth said, “Philipp wants the GC community to know that he started sporting his Amish-style beard while a student in Munich, long before he ever encountered Mennonites or Amish.”

Gollner can be likened to Keim in another way: his love of language. In addition to English and his native German, Gollner also speaks Swedish, Norwegian and some French. In addition, he reads Latin and Greek.

Roth is confident that Gollner “will maintain our department’s long commitment to both excellence in scholarship and a love for the classroom.”

Zehr added, “If I weren’t graduating, I would certainly be signing up for a course with him.” He encourages students to consider Gollner’s American History and US Immigration courses for the coming fall semester.