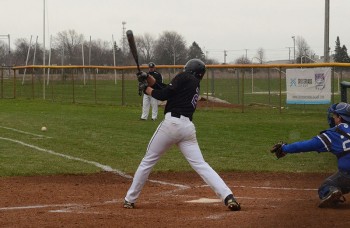 On Monday the Goshen College baseball team hosted conference opponent Bethel College in a day that served up a healthy dose of baseball.

Originally scheduled as a doubleheader, the teams also had to complete a game that had been suspended a few days earlier due to darkness. The Leafs were able to finish the first game with a victory before splitting the next two with Bethel.

Play began in the sixth inning of the suspended game, which saw plenty of early offense and both teams score three runs in the opening inning.

After that pitching and defense took over, as neither team was able to score until extra innings were required. In the bottom of the eighth, Austin Rook, first-year, hit a walk-off single to left field that brought Brad Lantz, junior, in to score the game’s winning run, giving Goshen a 4-3 victory. Trent Lynn, first-year, collected the win for the Leafs after allowing only one hit over three innings of relief pitching.

After the suspended game was completed, the day’s originally scheduled doubleheader got under way, with offense again coming early.

The visiting Pilots got on the board first with a pair of runs in the bottom of the second to jump out to a 2-0 lead. Goshen responded with a run in the third when Rook was allowed to score on a Bethel throwing error, cutting the lead to 2-1.

This was as close as the Leafs came however, as Bethel scored a pair of insurance runs in the top of the seventh to take a 4-1 win. Goshen struggled at the plate, collecting only three hits to the Pilots 10. Travis Grimm, sophomore, got the start for the Leafs and went the distance, pitching all seven innings for Goshen.

In the day’s final game Goshen opened the scoring in the bottom of the first, when Noah Shail, sophomore, scored on one of Bethel’s three errors during the inning.

The Leafs took a 2-0 lead in the fifth inning when Shail drove Rook in with a two-out RBI (run batted in) single. Bethel came storming back in the top of the sixth with a pair of runs to tie the game at two with extra innings again being a possibility.

But once again, the Pilots were their own worst enemy, committing their fourth and final errors and putting the final nail in the coffin when a wild throw allowed Lynn to score the game’s winning run, earning Goshen a 3-2 victory.

Xavier Luna, first-year, got the win for Goshen, allowing one hit over an inning and a third of relief. Goshen’s pitching limited the Pilots to three hits in the contest.

After Monday’s baseball marathon, Goshen’s record stands at 12-22 (4-4 in conference) for the season.

The Leafs are back in action on Friday and Saturday when they will play a pair of doubleheaders against conference opponent Taylor University in Upland, Indiana.