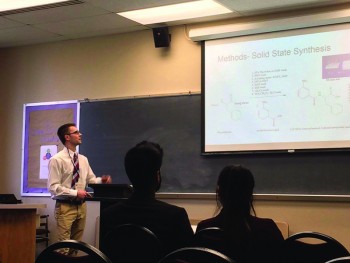 The 18th annual Academic Research Symposium featured 24 student presentations on a variety of topics, ranging from science research to gender differences on campus.

“The presentations aren’t dull,” said Anneliese Baer, a senior. “There are a range of topics, and you’re bound to be excited by at least some of them, if not all of them.”

Baer presented on a project she did during Maple Scholars last summer while researching with Paul Keim, professor of Bible and religion. Titled “Theodicy and Martyrdom: Anabaptist Reception of the Book of Job,” she looked at the use of the Book of Job for Anabaptists to “explain why they were being tortured and persecuted during the Reformation.”

In addition to presenting, Baer was the program coordinator.

“This is an extremely important event that I believe not enough students take advantage of,” she said. “I feel like a lot of students have the idea that it’s such a chore to do the symposium. I believe that this is a great opportunity on a small scale to participate in sharing ideas at a professional level.”

While the symposium included a number of junior and senior presenters, it featured student work from each of the classes.

Anne Buckwalter, a first-year, presented on research she had done for her Opera and Musical Theater class. She felt that her presentation, “Tradition: An Important Cultural Aspect of Jewish Community,” got better as she spoke. Buckwalter sees the symposium as a way for students to share things they are
passionate about.

Lynelle Leinbach, a senior, presented her senior history thesis paper, a closer look at why the Elkhart police were “distrustful of the coffeehouse customers” at Partly Dave Coffeehouse in the 1960s and 1970s. She found that patrons of Partly Dave were “countercultural hippies” who went against the mainstream in Elkhart and were thus arrested, and this resulted in her presentation, “Brewing Stereotypes: Apprehension of Partly Dave Coffeehouse,
1966-1975.”

“I think any kind of presentation is helpful for gaining skills in communication and explanation, regardless of what major you are studying,” she said. “Because of its open-endedness, the symposium lets you share your academic interests with students who aren’t usually in your classes.”

Jacob Roth, a junior, presented on the Distributed Drug Development program (they use “amino-acid derivatives as potential drug leads for neglected diseases”) that Goshen is involved with, titled “Synthesis of N-Acylated Phenylalanine and Tyrosine Derivatives as Antimicrobial Agents.” He participated in order to share the research he was involved in, but also in an attempt to “demystify the happenings of the third floor” of the science building.

“I enjoy working in the lab,” he said, “but I think it is imperative for scientists to continually interact and collaborate with
the public.”

Joe Kreider, a junior, delivered his paper “Love’s Disport: Intemerate and Carnal Sexuality in Milton’s Paradise Lost” to gain more experience with presenting academic papers and to add a line to his resume.

“[The symposium] is very welcoming and relaxed,” he said. “Anyone, regardless of the level of academic expertise, can make a valuable contribution.”

Paul Zehr and Christina Hofer, seniors, presented their work, “Gender Parity in GC Theater.” The two conducted research to find out the ratio of male to female actors and playwrights of the GC mainstage productions in the last 10 years. They also talked with students and faculty in the theater department about their perceptions of gender parity in GC theater.

“The most valuable part was getting our research out there,” Zehr said, “especially since it directly pertains to issues on campus.”

Students that participate can gain experience with presenting, but students and faculty members in the audience have the opportunity to learn a lot.

“The presentations are short and packed with deep information,” Leinbach said. “So if you have an interest outside your major, the symposium is a good way to learn about it.”

Baer also found the presentations to be insightful.

“Students are doing really good work to fix actual problems,” she said. “We [students] need to listen to each other. There were multiple presentations about gender disparities on this campus, and I learned a lot.”