Leafs drop a pair to Grace 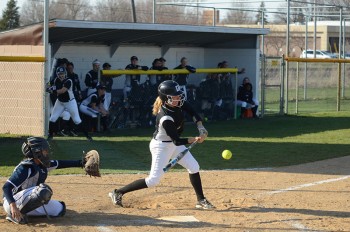 The Goshen College Softball team visited Grace College on Tuesday, dropping a pair of games to the Lancers. Game one saw Grace edge out the Leafs for a tight 2-1 victory before Grace’s offense kicked in with an 11-3 win in game two.

Grace opened the day’s scoring in game one with a run in the bottom of the first inning. Goshen responded quickly when a half-inning later, McKinzi Vega, first-year, hit a solo home run on a full count to tie the game at one. Pitching would have the upper hand for the rest of the game as neither team found any offense until the Lancers broke the deadlock in the bottom of the sixth inning with a one-out RBI (run batted in) single to give Grace a 2-1 lead. That would be enough for Grace to close out Goshen in the seventh inning and take game one of the doubleheader.

The Maple Leafs fought back in the top of the sixth with a pair of runs to cut the lead to 5-3. However, the comeback bid fell short, as Grace put the game out of reach with six runs in the bottom of the sixth to secure the victory and a sweep of the doubleheader.

Munoz and Krista Sutliff, junior, tied for the team lead with two hits apiece with Sutliff and Langley each recording one of the team’s two RBIs. Maes, Flickner and Taylor Sutliff, first-year, all scored a run for the Maple Leafs. Maes got the start for Goshen, allowing two earned runs on seven hits through four innings of work. Miller and Kylee Welch, senior, both pitched in relief for Goshen.

With the losses, Goshen’s record stands at 3-20 (1-7 conference) on the season. The Maple Leafs are in action again on Friday, April 1, when they will host conference opponent Taylor University in a doubleheader. First pitch is scheduled for 3:00 p.m.