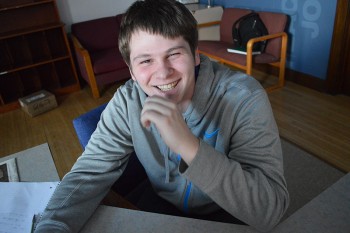 Wesman opens up about his process of dealing with past injury and subsequent quietness.
Photo by Maria Bischoff

If you’ve ever tried to talk with me about anything other than sports or Star Wars, you’ve probably figured out I’m not great at conversations.

Even my friends would tell you that I’m definitely not a conversationalist; I prefer to sit back and listen to others. If you have attempted to talk to me about something more personal and I haven’t seemed overly enthused to engage, please don’t be offended, it’s nothing you’ve done, I’m just very selective about who I tell what. But there’s a reason for this.

In the summer of 2009 I was a geeky little 14-year-old, doing the only thing I ever really felt comfortable doing: playing baseball. For the first time I was beginning to think I had everything under control—boy, was I wrong.

In early July I was kneed in the head while attempting to steal second base, and long story short, I ended up spending a while in the emergency room. I have virtually no memory of the next several weeks following my injury.

I wasn’t supposed to go upstairs unless it was absolutely necessary, I couldn’t watch TV or play video games, I had limited exposure to light and time outside, and had regular headaches.

On top of that, my athletic career essentially ended. My summer was basically spent sitting in bed in a dark room just staring at the wall—not exactly how a 14-year-old envisions his summer going.

But, as bad as the summer was, going back to school was even worse.

I don’t generally like being the center of attention, and I realized rather quickly that’s what I had become. Everyone wanted to make sure I was doing okay and was willing to help however they could, which was a kind gesture, but it just annoyed me. I wanted things to go back to the way they had been before, and as long as they kept trying to help me I was forced to accept reality.

The absolute worst was when people would say things like “God only gives the hardest tests to the strongest people.” My 14-year-old response was faking a smile and thinking, “Well, then he screwed up, because I’m feeling pretty freaking weak right about now.”

And the actual “school” part of school had difficulties of its own. I had been strong in Spanish class in the spring of 2009 and now just a few months later I was completely lost. I had been a speed reader and now took 15-20 minutes just to read and comprehend a single page. I used to talk nonstop and suddenly had difficulty forming coherent sentences in my mind on the fly.

And here’s when I began playing the quiet game. I stopped engaging with people, because I was afraid that I wouldn’t be able to speak coherently and was afraid of what they might say if I revealed what had happened to me. It wasn’t an overly rational fear, but it took hold of me.

I’m not really a whole let better now than I was then. Though it’s been nearly six and a half years since my injury, I still deal with recurring issues to this day. I still struggle with reading, lose my train of thought or words when speaking and writing, and have severe headaches at random times with random intensities.

All of this still causes me to be hesitant to talk to people when the questions start getting slightly personal, based on some irrational fear of some unknown that I have—heck, I’m pretty nervous as I’m writing this. The past year or so I’ve slowly been getting better, thanks to a great group of people (despite popular opinion, Howell doesn’t suck) who have coaxed bits of information out of me a little at a time.

I guess that’s my point in all of this. If you’re having a problem with something—anything—find someone you can talk to.

Do not do what I did and just close yourself to the world out of fear and the assumption that no one wants to listen, because there are people who will.

Bottling everything up inside is not a healthy or enjoyable way to live—trust me on this. It might be frightening, but the relief from talking about it will be worth it.