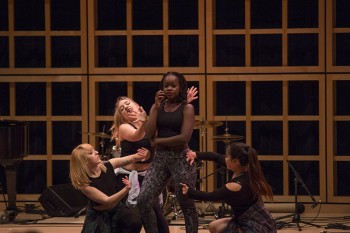 Saturday night saw a flashback to the 1920’s for the annual spring Kickoff event, and like the decade in U.S. history, it was extravagant.

The student population turned out in droves to support the thirty students who competed. Acts ranged in content, including multiple bands, tap and pop dance, solo voice performances, original rap piece and a poem recitation.

The theme for the evening was “The Great Gatsby.” The Campus Activities Council supported the theme with hosts dressed in flapper dresses and feather boas, and the appearance of Charlie Chaplin, both in a video skit and as represented by Kevin Florentin, a sophomore member of the CAC. Other CAC members include Frances Fonseca, Mikhail Fernández and Adrienne Schmucker, seniors, and Gaby Williams, a junior.

The evening started off with the hosts being transported back through time in a portal located by Java Junction, and emerging in the “1920’s.” They then filled transition times with games, T-shirt giveaways and stand-up comedy.

Transitions were also used as time for shout-outs from different clubs on campus. Announcements were given for BSU, LSU, FIRSST, Hymn Club, GSWA, Prism, GC Players, Julius Caesar and Student Senate, who promoted the work of student Maddie Gerig by giving away some of her mugs.

Along with a variety of acts, several age groups were represented in the performances.

Many seniors competed for the final time, including Olivia Gin, a dancer who has arranged and performed in multiple Kick Offs. Her group of dancers, called the “Divas,” took home first prize.

However, a number of first-years were also represented, including Sara Azzuni, who recited the poem “All Shades of Anger” by Rafeef Ziadah, about being a Palestinian woman in the current political climate.

Azzuni’s performance ended up taking the award as audience favorite. When asked why she chose that particular piece, Azzuni said, “I like poetry, and people here don’t know much about my country and what happens there. I wasn’t sure it would be acceptable because it is so powerful. But they obviously liked it.”

Other awards for the evening went to bands, with second place awarded to “The Groove Machine” and third prize to “Indiana Bible Company,” who performed “How to build a Planet,” by the band Kansas Bible Company.

Grant Flaming, a junior and member of the Groove Machine, said that winning an award wasn’t the goal of performing. “I mean, it’s cool. We won like fifty bucks or something, which I guess we can use to get some food or something,” he said. “It wasn’t really about that though. We just had fun performing.”

Having fun performing seemed to be the theme of the evening, according to first-year Naomi Peters, who performed the piece “My Immortal” by Evanescence. “[Not winning] doesn’t really bother me. I just did it because I love to perform,” she said.