Reflections on living in a white world 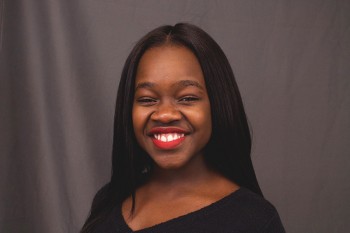 Achieng Agutu discusses her experience as an African woman living as a student in a predominantly
white area of the United States.
Photo by Hannah Sauder

The only thing that is physically “white” about me is my teeth, which are actually turning into a dull ivory, sort of like pearls. You know? (But, maybe I should get that checked.)

Ethnically, I am African. Culturally, I am Kenyan (Luo). Linguistically, I am English, but only during the day; at night I break into a mix of both my native languages, Swahili and Luo, as I indulge in the town gossip my mother tells me during our daily 1:00 a.m. phone calls.

“Baki na wasungu, na utaenda mbali sana mama,” my mother tells me in Swahili every time I talk to her. I don’t know what she means by that, in all its nuance. But she says it with so much sincerity that it has to mean something really important. The sentence means roughly: “Stick with the white people and you will end up somewhere.”

Even in my own country, Kenya, with 86 percent of the population being black, white supremacy has still managed to penetrate Kenyan society and program the people to believe that white is better. My mother is now 49 years old and she has been telling me to stick with white people since I was 10. For nine years she has told me this.

It took society 40 years to program my mother so that she would tell her 10-year-old daughter that “white is better.” But don’t get me wrong, my mother is a strong, intelligent, beautiful African woman and I owe it all to her. However, it just puzzles me how she has voluntarily placed herself in the status of a second-class citizen. In reality, society shoved her into that status.

I want white people to recognize that on a daily basis, they hold a number of advantages and immunities that have been a direct result of the oppression of people of color in the United States and around the world.

When phrased that way, it doesn’t sound nice, does it? Makes you squirm in your chair a bit and maybe feel a little uncomfortable, right? I want to make visible the privileges white people have that continue to help maintain white supremacy.

White privilege means that you will be welcomed and treated with respect no matter what country you visit. To be limited only by your own efforts and not the color of your skin. To have access to the best education in the world, without having some type of “scholarship” to receive immediate recognition.

This scholarship is created to make you feel wanted and worthy of an education but in reality this is what it means. “Congratulations, human from an ethnic minority, you have been accepted to a white prestigious university. But before we let you become part of these white pure walls, we would like you to write a 1,000-word essay about why we, a predominantly white institution, should let you, a person of color, become part of our high-status society. Don’t be alarmed, but we have heard your story many times before, so try hard.”

White privilege is to be able to walk around with big, thick, kinky hair without having hands petting your hair or being asked questions like “Is it real?” To dance, without being asked if you can twerk. To be free and looked at with respect. To be less alien, less foreign, less other, less exotic.

White privilege is not having your name changed into an easier-to-say Anglo-Saxon name, like Annie, the English name I was given at birth by my parents, for the sole purpose of making it easier for the tongues of my British teachers and friends not to strain. But what is so hard about saying a name like Achieng? That’s my African name, meaning “sunshine” in the Luo tribe which I am part of.

White privilege is to be eloquent in your speech without people being surprised. White privilege is not understanding family trees whose fruits have been exploited, whose leaves have fallen, whose roots are dug up to remind you that you don’t belong here.

Every time I break from the Western world and head back to Kenya, I realize that I no longer know which place is foreign and which is home to me. Sometimes I sit and think to myself what it would be like to be W-H-I-T-E white.

If I have made you uncomfortable, then I have done my job. It’s not a bad thing to feel uncomfortable. There is a beauty in the darkness of your soul and it may be hard to venture down a path that seems narrow and dangerous, but it’s worth a try.

“Achieng, nakupenda na mwoya yangu yote. na uli fanya homework?” My mother always seems to ends our conversations with that remark. “Achieng,” she is saying, “I will always love you with all my heart. And by the way, did you already do your homework?”