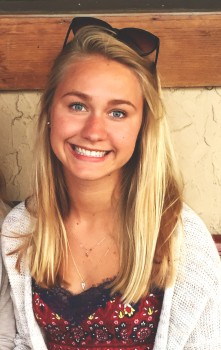 Can you tell me a little bit about your home country?

It’s pretty similar to the US. There are shorter summers, but colder winters, and we have large lakes. I moved to the U.S. when I was 6, so I don’t have much memory of Russia because I was so young.

Do you ever go back to visit?

I haven’t been back recently. I was going to make a trip this summer but my citizenship process got in the way.

Does your family live here, in Goshen, too?

How has the transition been to living in the United States?

It was hard coming at a young age, but it also helped me to learn the language. I had to teach myself everything in kindergarten. Making friends was really hard because I couldn’t speak the language, and when I could, my accent was very thick. The adjustment was more difficult for my parents. No one in my family knew English. We came here with two suitcases total.

Why did you come to America?

Everyone was coming [because] there were more opportunities for a better life and all that, but our green card status said “religiously persecuted refugees.”

Is it hard to be here—do you miss Russia?

I miss knowing where I came from. I miss being fully fluent in my home language. I’ve assimilated to American culture well, but we are a part of a Russian community here. We attend a Russian/Ukrainian non-denominational church in the Goshen area.

You said you gained your US citizenship this summer. How was that process?

We applied in May, got our fingerprints done, and then in June there was an interview. Each of us went individually. My parents studied, but I think my history classes in school really helped me. I went alone to Indianapolis for my interview. The process can get delayed easily because they (the government) set the date and if it doesn’t work for you, you have to wait until they send you another date which can take 2-3 weeks. Then, after the interview, in August there was an oath ceremony.

What did they ask you?

They gave us a book to study from and then were asked 10 questions from that book. The questions were mostly about US history. But they also asked about our current government—they wanted to know your state’s senators and things like that.

Do you plan to stay in America after graduation?

I want to go back to visit and see my aunt, but I don’t think my knowledge would be any good there. Everything I have learned is in English and from an American standpoint. I will have a biochemistry degree and want to go to medical school here in the US when I graduate.

How does commuting fit into your class schedule?

It’s more difficult socially; it works with my class schedule easily. Well, except in the winter when I get stuck sometimes. During my freshman year it was hard to make friends because of commuting, but having friends in the dorms and apartments help.

Are your friends primarily other international students or commuters?

No—opposite, actually. I have one close friend who is a commuter, but all the others live on campus and are mostly from the US. I do have some Russian friends from church, though.

Do you ever feel ostracized or left out because you commute?

Definitely. People who live here have an automatic invitation to things because they live here, but I feel like I need to be invited. Commuters aren’t integrated very often. I went to a social event and a kid made a comment that I was the first commuter student they had seen there.

Or because you’re an international student?

No, I think people like me more because I’m Russian. It’s easier to meet people and have a conversation because they think it’s cool and want to know all about where I come from.

How do you think Goshen could combat this (being left out)?

I think it actually depends on the people themselves and if they’re willing to make an effort. I don’t want to say you have to acknowledge that you’re not part of residence life, but you have to put yourself out there despite that.

Are you happy you decided to come to GC?

Yes! I hated it at first, but now I enjoy it and the small classes.