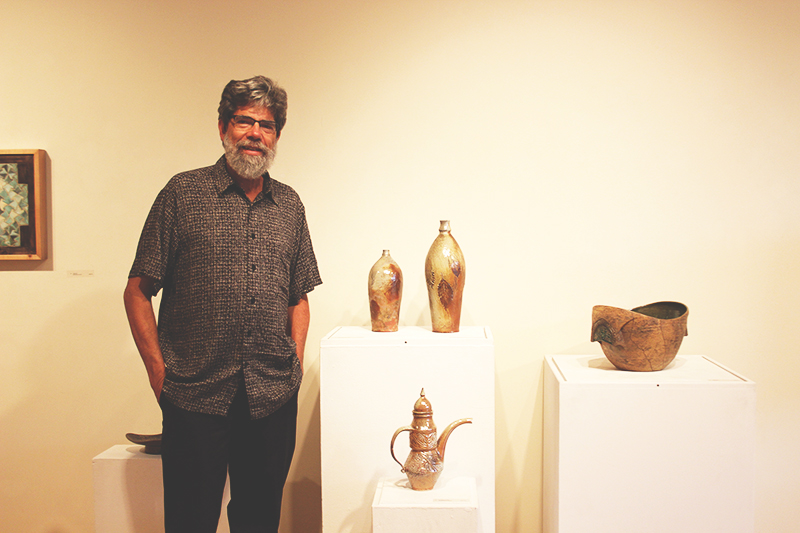 Dennis Maust, exhibiting ceramicist from Lancaster, Penn., spoke on Sunday about the international influences for his art.
Photo by Dona Park.

At the conclusion of his exhibit in Goshen College’s Hershberger Art Gallery, Lancaster-based ceramicist Dennis Maust stopped in at GC on Sunday to give a Topics and Issues lecture about his artwork. The exhibit, which was open from June 7 to Sept. 27, featured dozens of ceramic pieces, inspired by the time he and his family spent in Pakistan, Egypt and Bangladesh.

In his presentation, Maust explained how many of the pieces feature patterns, structures and colors that echo things he saw and experienced living abroad. He was specifically inspired by the way that cultures interact. Maust enjoyed making the “sometimes smooth, sometimes difficult” interactions between cultures, as he described it, evident in his artwork.

One of the largest series on show at the exhibit was a table laid out with ceramic dish-ware featuring religious symbols from Christian, Islamic and Judaic traditions. This series was specifically inspired by the current conflict in the West Bank and by Maust’s belief in the “power of breaking bread together” in order to solve conflicts around the world.

“The work in this exhibit emerges from a thousand moments of contemplation,” he said.

Another component of this show was a set of about a dozen four-legged mugs that looked as though they were made to mimic the bodies of animals. Maust explained that he does not make the mugs with any specific animal in mind. According to Maust, he often hears different speculations from viewers on what animal they believe the mugs look like.

Maust is also a big believer in making do with what he has, and tries to reuse his materials as much as possible. If there is a small scrap of clay that he can incorporate into a piece, he uses it.

When he was in college, Maust found it hard to understand what he had to communicate to the world. However, as he has gotten older,  he has found that the smallest interactions and encounters now inspire art pieces in ways that he may not have recognized before. Now, he often feels as though he doesn’t have enough time to convey all of his thoughts in his artwork. “The work of our hands will reflect our values,” he said.

Maust is a 1975 Eastern Mennonite University (then Eastern Mennonite College) alumnus. He attended Goshen College for a semester during his senior year, as he was determined to study under Marvin Bartell, the ceramics professor at the time, who he credits for teaching him most of what he know about ceramics.

Since graduating from EMC, Maust has received a Masters of Arts degree in ceramics and painting from James Madison University, Harrisonburg, Virg. and a Master of Fine Arts degree from Rochester Institute of Technology’s School for American Crafts, Rochester, New York.

In his free time, Maust enjoys playing and coaching high school tennis, gardening, singing and playing the mandolin, all of which, he said, distract him regularly.