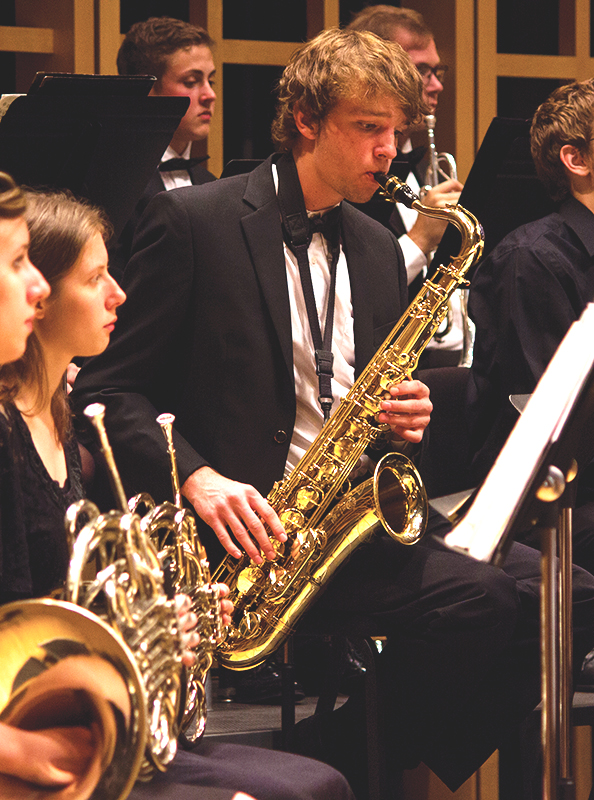 This year, one student is doing more than just participating in the Lavender Jazz band; he is helping to direct.

Lavender Jazz, sometimes referred to as, “the big band on campus,” plays a variety of music, including jazz, world beat, and fusion. The group usually has two concerts in Sauder per year and an annual gig at Goshen’s First Fridays. This year, the main director is Chris French, adjunct professor of music, assisted by third year, Jacob Penner.

Penner has been a saxophone player in the Lavender Jazz band since his first semester at GC and has played in various jazz bands since middle school. Last year, Penner went to the band director with some feedback about how he’d felt the year had gone. Overall, he didn’t think that the band had spent enough time practicing and playing music. He encouraged the idea of having a jazz combo to expose people to more jazz music. As a result of his suggestion, the music directors asked him to act as the head of the jazz combo this year.

Penner helps to select music and is present during rehearsal to “maybe teach a little theory so that [the band is] comfortable improvising. That is what the group is about.” According to Penner, being the student director doesn’t require too much extra time.

“My favorite part [about being in the ensemble] is when we are playing together long enough that everyone ends up getting it and I don’t have to teach or tell anybody to do anything,” explained Penner. “We all just come together and make this music that is spontaneous and will probably never be heard again the way we played it. Everyone is in control and it’s collaborative.”

Although we’re several weeks into the semester, Penner encourages students to join the jazz combo.

“Anyone can join the jazz combo,” said Penner “It’s not often you get to play whatever you want in a music ensemble.”

After college, Penner wants to keep playing jazz. He hopes to find others who are passionate about music and to “jam” when he can. Look for Penner and the rest of the Lavender Jazz band at their first concert on Friday, November 20 at 7:30 p.m. in Sauder Concert Hall. In addition, there might be a special jazz combo concert and random performances by the group around campus.