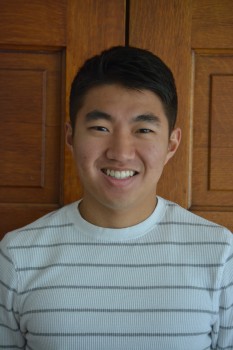 Rising from the wrecks of the Korean War, in the last 50 years South Korea has become one of the world’s most

economically influential countries. This is a result of South Korea’s growing prosperity, fashion culture and social media. South Korea has been able to maintain its exclusive culture that is now becoming a recognized inspiration for worldwide trends. This includes a more expressive style that echoes a sense of individuality.

from Seoul, the capital of South Korea. Hwang, however, has been living in the United States for six years and would consider himself more American than Korean now.

“I mostly go to Korea over the summer,” said Hwang.

his sophomore year of high school as an exchange student. He lived in Louisiana, and then moved to Kidron, Ohio to finish

“Moving from Korea to Louisiana was a big change, but moving from Louisiana to a Mennonite community was big too!” Hwang said.

He spoke about having to adjust to both places. Having been exposed to two different cultures that shared nothing in common, Hwang found it challenging to start living in a more liberal way. Hwang is grateful to the Goshen College community for showing him a different way of living—a caring way of living, a diverse way of living and most importantly a spiritual way of living.

He hopes to get into dental school after graduation to become a dentist here in the United States. When asked about his free time Hwang said that he enjoys watching movies in the Howell movie room, working out at the RFC and just hanging out with friends. Hwang spoke a lot about family and stressed most about building the relationships he has made here in the United States.

“I want to live in the United States even though my parents live in Korea.” Hwang said.

He has a sister living in North Carolina. Hwang also considers his American family as real family. He encourages everyone to enjoy their college career as it will fly by faster than you know it.