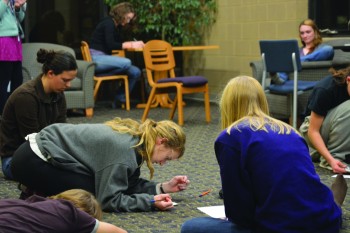 elly Miller, a senior, participates in a reflective exercise during the Conversations on Mental Health event on Tuesday night.

Future. Apathy. School. The words, written in thick brushstrokes on a small Buddha board, are the three main stressors for the group of about fifteen college students who gathered on the third floor connector on Wednesday night. This group came together to discuss mental health as a part of Healthy Bodies week, organized by the Goshen Student Women’s Association. Anya Slabaugh, a sophomore and co-leader of the newly formed We Are All Human club, directed the small band, and a discussion of stressors was the first order of business. However, the true focus of the meeting was on anything but business or busywork or work. Instead, Slabaugh asked everyone to get comfortable, to take their shoes off, to roll their shoulders and stretch their legs out. Black flip-flops and rain boots, tan boots, and white sneakers dropped to the floor, giving way to grey and cream socks, red ankle socks and bare feet. Several pairs of eyes closed as arms reached towards the sky, hands open wide as bodies swayed back and forth to the music of an unseen group of musicians drifted from one of the nearby lounges.

A calmness appeared to wash over the group, and students lay on the floor, many with eyes closed, as Slabaugh read an excerpt from Brene Brown’s book The Gifts of Imperfection. Breaths slowed and harried people took a break as Slabaugh read of the importance of playing and of how “spending time on anything but the to-do list… is a terrible waste of time.” According to the reading, the extreme emphasis our society places on business and “doing” is actually wearing us down, tiring us out. As many college students can attest to, the push to be busy is felt almost all the time.

Play, Slabaugh read, “is the opposite of depression.” Play helps human beings deal with the stress of day-to-day life. In the spirit of play, students took part in a laughing game; while laughter can often feel out of place when a test is failed or a night is spent studying, laughter is a huge stress reliever and the benefits can be reaped just by going through the motions. Even if mirth is not involved at first, laughter is funny, and the giggles and snorts that the group was asked to emulate soon grew into real, heartfelt chortles and belly laughs.

Finally, the group was offered students sheets of blank paper to fill and wires to bend. Some wrote, some drew, others twisted metal into small sculptures, and the unseen musicians continued to play as well, all of them creating and doing and playing.

Rest is also important when trying to stay healthy and mentally engaged. Dominique Chew, a co-leader of GSWA, said, “Oftentimes breaks are not something I schedule into my day… that’s unhealthy.” Eva Lapp, also a GSWA leader, “sometimes we need to feel validated in taking a nap.” Students continued to fill sheets and sculpt metal; some laid their heads on their arms and others curled up in chairs or on the carpet, glad for a bit of a break before returning to the routine of study and college life.

WAAH’s purpose is to promote the discussion of mental health on campus and on removing the stigma that is often associated with talking about it. According to Slabaugh, though, “[Tuesday’s event] focused on taking care of yourself… and more on self-care than discussion of self-care.” Meanwhile, the words on the Buddha board slowly faded away, as if removed by the laughter, play, and rest of those present.