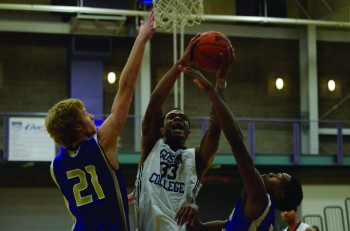 Junior Dominique Bolden, fends off two Grace defenders while going up for a shot.

On Saturday afternoon, Goshen’s men’s and women’s basketball team hosted a double header against Grace College. Both Maple Leaf teams had defeated Grace earlier in the season in exciting games, but the visiting Lancers avenged those disappointments with two exciting wins of their own.

The Goshen women started the day’s first game by jumping out to a quick lead over Grace, scoring within the first 30 seconds. The Maple Leaf and the Lancers traded early lead changes throughout the first half until Grace got the lead and held it for the final 3 minutes of the half, taking a 33-29 lead into the break. The second half was more of the same as the two teams battled back and forth. Several times earlier in the half Grace appeared to be pulling away, but each time Goshen came roaring back to make it a one or two possession game. With less than 13 minutes remaining Goshen trailed by 9 and was on the wrong end of an 8-0 run before going on a 13-2 run of their own to take a 53-51 lead with 8:40 left to play. The final minutes of the game were the same as the first minutes of the game, as the teams each looked to deal that final blow that would knockout the other.

Grace took a 2 point lead with 32 seconds remaining but Goshen responded as junior Liz Tecca hit a shot with 14 seconds left to tie the game at 70. But the Lancers had one last shot in them and took the lead for good with 8 seconds on the clock. Goshen’s final opportunity was squandered on a turnover with 2 seconds left. Despite outscoring Grace in the 2nd half, this time it was Goshen who was had to endure a 2 point defeat at home; the same way the Maple Leafs had knocked off Grace on the road earlier in the season.

Goshen was led by Tecca on offense with 16 points and a team high 4 defensive rebounds. Sophomore Sophia Sears and first-year Keshia Ward added 13 points 7 rebounds and 12 points 6 rebounds respectively. Junior Tyra Carver contributed 12 points off the bench. Sears and Tecca each recorded one of the team’s 2 blocks as well. Despite shooting better from the field, Goshen had 17 less foul shot attempts and 13 fewer points off foul shots than Grace. The Goshen women now sit at 16-8 (7-5 conference) on the season and played Marian University in Indianapolis on Wednesday night, and are at home on Saturday against Huntington. 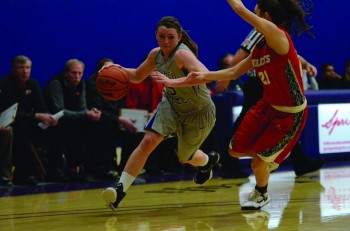 eduJunior Liz Tecca dribbles around Lancer opponent during the match on Saturday.

Goshen’s men looked to end the double header with a win and complete a season sweep of Grace, but ultimately fell by a score of 73-63. Senior Stefon Luckey led the Leafs with 15 points and 4 rebounds, while juniors Brandon Demmings and Dominique Bolden scored 8 points apiece. Demmings also added a team high 7 rebounds for Goshen. Goshen was hampered by only shooting 57% from the line and registering just 5 second chance points the entire game. Grace meanwhile shot 50% from the field and 40% from 3 point range, which was enough to secure the victory.

After trailing for most of the first half and entering the break down 11, the Maple Leafs looked to get things back under control in the second half. Goshen spent the early stages of the half trying to chip away at the Lancers lead, cutting it to a two possession game at 61-57 with 3 ½ minutes remaining. It was the closest the Maple Leafs would get to the victory as Grace closed the door by outscoring Goshen 12-6 in the final 3 minutes of play.

With the loss, the Maple Leafs are dropped to 13-11(6-6 conference) for the year and have now lost 2 in a row. They played Marian University at home on Tuesday night and next play on Saturday at Huntington University.